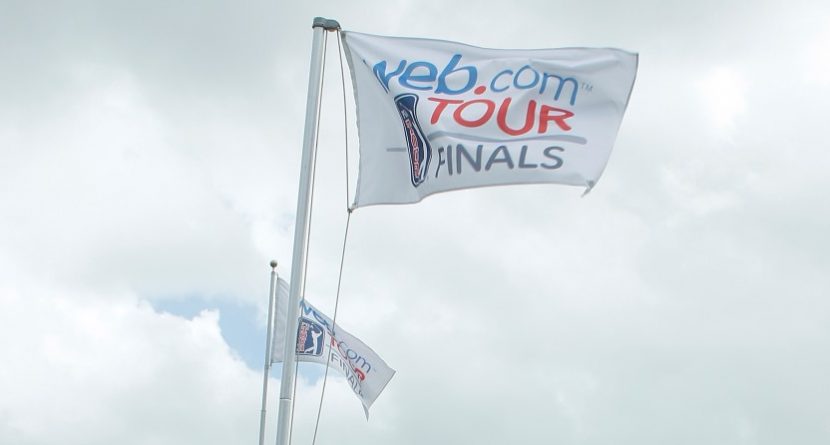 There were several reasons why I considered not writing this particular piece.  The first is that I actually work as an independent contractor for the PGA Tour when I do the live coverage on SiriusXM. Consequently, this piece could be deemed some sort of shill for Uncle Tim since indirectly he pays me. Secondly, writing about events that have gotten so little ratings and appear inconsequential to the general public may not have a broad appeal to the reader (so much for that good faith I just bought with the bosses). But I didn’t write it for everyone; I wrote it because I know more about this than most.

In terms of my opinion on the new Web.com Tour Finals and the access to the PGA Tour, I can assure you that I am far more guided by my career as a player than by any motivation now. I feel relatively certain that the folks in Ponte Vedra don’t care what my opinion is; if they did, they may have asked for it. Whether or not you care about the pathway to the PGA Tour is entirely up to you.

I cared about it for the better part of two decades because I participated in it nearly every year for far too many years. I am a graduate of both Qualifying School and the Web.com Tour (or its precursors) so I think that I have a unique voice here and that my opinion can be fairly based on experience rather than some desire to please the powers that be.

There are many pundits, former players and scribes who have come out in direct opposition to what we just experienced. Over the last five weeks, the first 75 players from the Web.com Tour and the next 75 players from the PGA Tour after the top 125 played a four-tournament set to determine who would receive the 25 remaining cards for the 2013-2014 PGA Tour season.

When I first heard about the abolition of Q-School as a pathway to the PGA Tour, I was as skeptical as anyone. Q-School  has been a tradition, a blight on the calendar of every aspiring professional for as long as most have been alive. To eliminate it and to require players to play on the Web.com Tour seemed, at the very least, unfair and quite possibly un-American. However, watching the new system work through the series of events, it became clear that a couple of things were true.

The most compelling argument against the new system is that it closes the door on foreign players and the younger players right out of college.  There is no question that is a fair point. Why would Joost Luiten or Mikko Ilonen come spend a year on the Web.com Tour when they are fully exempt in Europe? The answer is that they wouldn’t. More to the point, why should we care? If they improve their profile enough in Europe to compete in the World Golf Championship events, they will give themselves the opportunity to qualify for the PGA Tour, plain and simple.

The concern about young American players not having direct access to the PGA Tour just simply doesn’t hold water. The best young players have never had an easy road to the Tour, but the best of them always seem to make it one way or the other. Max Homa and Justin Peters will both make their professional debut at the Frys.com next week through sponsor exemptions. The goal for both is to obviously take advantage of their opportunities and earn their Tour cards.

I grant you that these players who played out the final summer of their amateur careers missed out on the opportunity to play a year-ending Q-School and possibly go directly to the PGA Tour in January. However, if either one has a top-10 finish at the Frys, he will already be qualified for the Web.com Tour Finals next year based on the money that was available this year. My point is that even if these guys forgo the Web.com Tour Q-School that is available to them, it is still feasible, even likely, that if they play well when they get their chances, they are going to get their foot in the door at the very least. If they do go to Q-School and earn status on the Web.com Tour, then they will be better players next year when they do join the PGA Tour.

This notion that a player is being forced to the Web.com Tour who should be on the PGA Tour is just ludicrous. Jordan Spieth missed in the second stage of Q-School a year ago and started the year with no status on the PGA Tour or the Web.com Tour. Spieth proves two points here. The first is that Q-School was always a flawed system if the goal was to recognize those most ready for the PGA Tour. The second is that the best players will always find a way.

Of course, Spieth is the exception. But his contemporary, Patrick Cantlay, used the first year of his professional career as it was drawn up. He qualified both on the PGA Tour and the Web.com Tour money lists for the Web.com Tour finals. After finishing 29th on the Web.com Tour money list, he earned his card through the Finals and will tee it up at the Frys.com Open as a member of the PGA Tour. A four-tournament series for a player like Cantlay certainly improves his chances of graduating as opposed to a six-day finals, where one bad round can end your chances.

And finally, the idea that there wouldn’t be enough drama at the finals was flawed to begin with and disproven when Lee Williams and Andres Gonzales reached the 18th green. Williams made a 50-foot bomb while Gonzales left a 20-foot putt short, right in the middle of the hole.  Williams advances to the PGA Tour; Gonzales heads back to the Web.com Tour. If Gonzales had made his putt, he would have bumped Williams out of a qualifying spot.

The new system isn’t perfect and is certainly no guarantee of success at the next level for those who graduate. With the new system, as with the old, there are still going to be a fair number of former Tour players earning back their playing rights because that will always be true. Take it from me, a guy who graduated from Q-School on a number of occasions, including twice in a row. Heath Slocum and Joe Durant have learned a thing or two about playing professional golf in their careers and they used that in the process to regain their PGA Tour cards. The reason is that they are better players than many of their younger, less-experienced counterparts. It is not that in some way the PGA Tour is trying to prop them up and give them another shot. Trust me, the Tour doesn’t work like that.

Having seen the new system play itself out, I believe that it is an improvement. I think that there should be a few tweaks that insure the Web.com graduates a higher priority number. I believe they have earned it. But overall, it is a far greater system for recognizing the best and most prepared players to take the next step, even if they have taken it before. Congratulations to all the graduates.