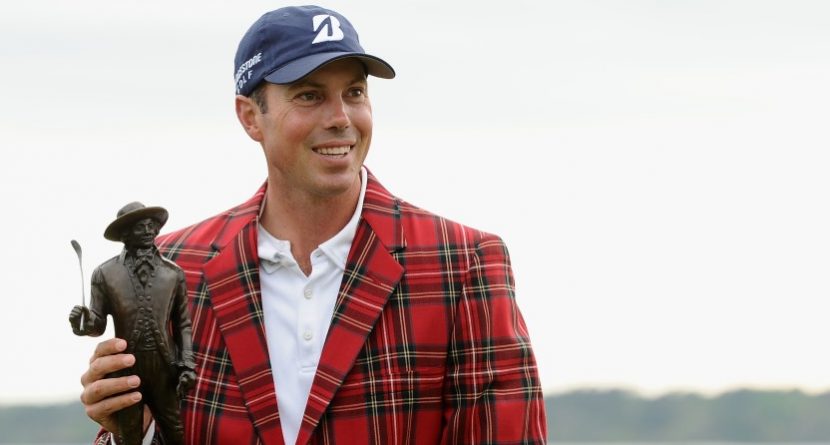 Last weekend may have featured the Masters, but this weekend was pretty big in its own right. Chances are, you’ll recognize the names atop the major tournament leaderboards.

Here’s a look back at the weekend across the world of golf:

Matt Kuchar finally gets his win
No one had been knocking on the door of victory over the past month as much as Matt Kuchar, and the door finally swung open Sunday. He tied for fourth three weeks ago (two shots out of first), lost in a playoff two weeks ago (Matt Jones chipped in from 42 yards for the win), and he held a share of the final-round lead a week ago at the Masters but stumbled and tied for fifth. Kuchar nearly tripped himself up again Sunday, when he three-putted from inside 10 feet and bogeyed No. 17. That dropped him into a tie for the lead, but the 35-year-old snatched it right back by chipping in from a bunker on 18 for birdie. Kuchar’s closing-round 7-under 64 put him at 11-under for the tournament, one shot better than Luke Donald, the overnight leader who started the day four strokes ahead of Kuchar.

Michelle Wie finally gets her win
Kuchar grabbed a pair of victories last year, so he wasn’t exactly enduring a dreadful winless streak. Michelle Wie, on the other hand, was. That ended Saturday, when she carded a 5-under 67 to take the LPGA LOTTE Championship in her home state of Hawaii. Her 14-under 274 bested third-round leader Angela Stanford by two shots, giving the 24-year-old Wie her first LPGA Tour win since the 2010 Canadian Women’s Open (a 79-event drought). Her third career victory on the tour comes two weeks after her second-place finish at the first ladies’ major of the year, the Kraft Nabisco Championship. Lee Westwood finally gets his win
Possibly motivated by the little Twitter war he found himself in with countryman Ian Poulter earlier this week, England’s Lee Westwood snapped a two-year winless skid Sunday by crushing the field at the Malaysian Open (a co-sanctioned European and Asian Tour event). He led wire-to-wire in Kuala Lumpur and his 18-under 270 was seven strokes better than Louis Oosthuizen, Nicolas Colsaerts and Bernd Wiesberger. It marks the 36th career victory for the 40-year-old Westwood, a former No. 1 player in the world. Miguel Angel Jimenez doesn’t wait long for his first senior win
The most interesting golfer in the world turned 50 in January, but there he was hovering in contention last week at the Masters. Miguel Angel Jimenez ultimately took a fourth place (his best Masters finish ever) and carried that momentum into his Champions Tour debut this week at the Greater Gwinnett Championship in Duluth, Ga. The Spaniard grabbed the lead with a 7-under 65 on Friday, and he never relinquished the edge, coming home Sunday with a 67 and overall 14-under 202, two shots ahead of another 50-something Masters surprise, Bernhard Langer (T-8 last week). Five shots back of Jimenez and in fourth place Sunday was Fred Couples, who also impressed at Augusta National (T-20). Don’t get used to seeing Jimenez on the senior circuit, though; he wants to make the Ryder Cup team, so he’ll continue playing with the younger guys.

18-year-old takes inaugural PGA Tour China event
As the PGA Tour grows the golf market in China, it held the first-ever PGA Tour China event this weekend: the Mission Hills Haikou Open. You may remember this resort from the The Match at Mission Hills in October, the one-on-one duel between Tiger Woods and Rory McIlroy. Playing a different course but putting on a show like those two was 18-year-old J.H. Wang, who carded a 23-under 265 and finished 10 strokes in front of Xin Jun Zhang. After sharing the 18-hole lead with a 5-under 67, Wang went 63-69-66 to sprint away from the field.