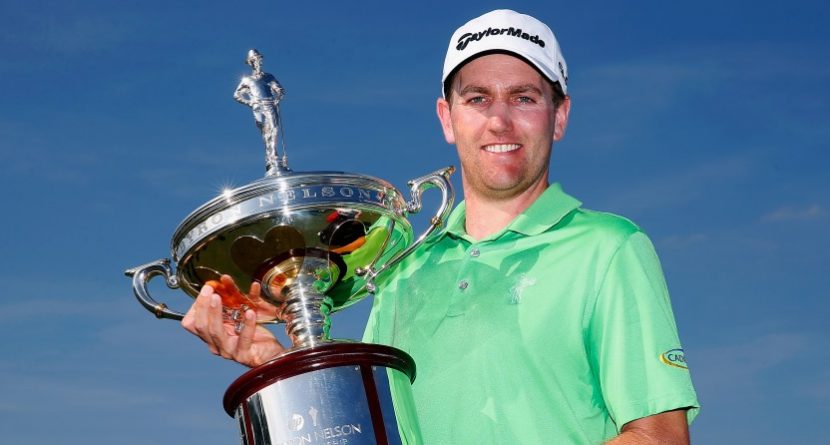 There’s another first-time winner on the PGA Tour, the revered Miguel Angel Jimenez sets a record on the European Tour, Kenny Perry grabs another senior major, and Lizette Salas secures her first victory on the LPGA Tour. It was a busy weekend in golf; here’s a look back:

Bogey-free Brendon Todd takes first PGA Tour title
Playing with the lead and on the cusp his first victory in the big leagues, Brendon Todd played as steady as a 10-year veteran on Sunday to collect a two-stroke victory at the HP Byron Nelson Championship. He held the lead after 36 holes and shared it after 54, then proceeded to knock in four birdies on his first 10 holes in the final round en route to a closing 4-under 66. Todd didn’t card a bogey all day, and went over par on just four holes all tournament. His 14-under 266 gave him his first win on the PGA Tour (after two on the Web.com Tour), earned him a nice $1.2 million check, got him an invite to next year’s Masters, and made Todd the fifth former University of Georgia player with a PGA Tour victory this season (Bubba Watson, Harris English, Russell Henley and Chris Kirk are the others).

And his best shot of the day was a left-handed chip with the back of his wedge to help save par:

Remember Mike Weir?
That left-handed Canadian who won the 2003 Masters? Yep, he still plays. Weir hasn’t played well of late – or really since 2010 – but there he was birdieing four of his first five holes Sunday to take a two-shot lead. He couldn’t hold on but took a solo second, his best finish since the 2009 AT&T Pebble Beach National Pro-Am, and his first top-25 since 2010. The $745,200 he collected this week is more than he earned the past three years combined. Not bad, eh?

Wise lessons from Miguel Angel Jimenez
The most interesting golfer in the world was already the oldest winner on the European Tour, but Jimenez won the Spanish Open on Sunday for good measure, and in doing so became the first 50-year-old winner on the tour. Two weeks after getting married, Jimenez topped Thomas Pieters and Richard Green in a playoff after making par on the first extra hole; the three were tied at 4-under 284. What is Jimenez’s secret? “There is no secret,” he said. “Good food, good wine, good cigars and some exercise.” The man has life all figured out. Kenny Perry three for his last three in majors
In his third consecutive start in a major on the Champions Tour, Kenny Perry left with the title. He hasn’t won the past three majors, because he didn’t partake in the Senior Open Championship last July, but in the past three big ones he’s played, he’s won. Perry beat Mark Calcavecchia by a stroke to claim the Regions Tradition, 2014’s first senior major. The title joins the Senior Players Championship and U.S. Senior Open that Perry claimed last year, giving him three majors in his first four years on the senior circuit. Lizette Salas smooth in taking first LPGA title
After beginning the day with a three-shot lead and stretching it to six at one point, 24-year-old Lizette Salas ultimately took the LPGA Tour’s Kingsmill Championship on Sunday by four strokes. Her 13-under 271 came after an even-par 71 in the final round and only four bogeys over all four rounds. It’s Salas’ first career victory in three years on tour, and comes with a $195,000 check. The win also bumped Salas up six spots to No. 10 in the world rankings.