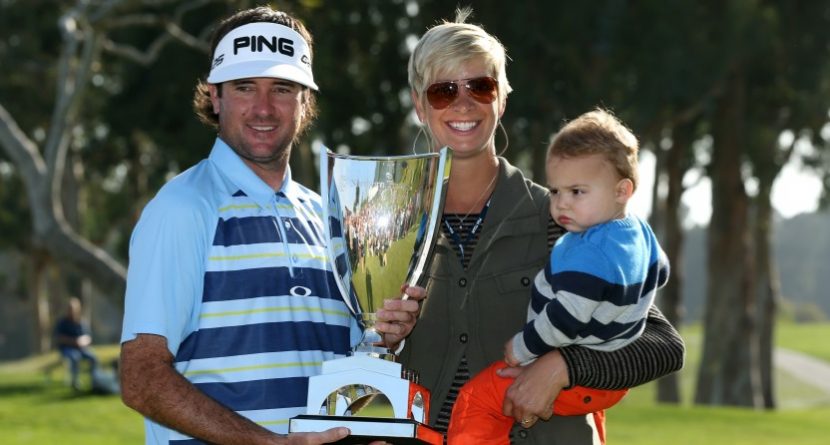 Bubba Watson enjoyed a weekend to remember in Los Angeles, Australian Karrie Webb came through in her homeland’s open championship, and South African Thomas Aiken kept alive his country’s recent run of success. Here’s a look back at the weekend:

Bubba Watson’s bogey-free weekend lands victory
Bubba Watson missed a 5-foot putt that would have forced a playoff two weeks ago at the Waste Management Phoenix Open, but he rejected any such drama on Sunday. The 2012 Masters winner clinched his first victory since that major by dropping in a birdie putt on the 72nd hole of the Northern Trust Open, carding his second straight bogey-free, 7-under-par 64 (he finished with a 15-under 269 overall). That bested Dustin Johnson by two strokes, giving Paulina Gretzky’s fiancé his second consecutive runner-up finish and fourth top-10 result in four events this 2013-14 season. Meanwhile, Back9Network ambassador William McGirt, who held the 54-hole lead, placed T-6, five shots off Watson’s pace.

Karrie Webb comes back for another Australian Open
Thirty-nine-year-old Australian Karrie Webb – coming off a disqualification last week at the Australian Ladies Masters for signing an incorrect scorecard – made up a six-shot deficit Sunday to win her fifth career Women’s Australia Open. It also marks her 40th career LPGA title, and came after she carded six birdies and two bogeys Sunday for a 4-under 68. Webb’s overall 12-under was one shot better than South Korea’s Chella Choi, and eight shots ahead of Back9 ambassador Cheyenne Woods, who finished T-23. After winning the Ladies Masters last week, Woods hovered near contention after a 7-under 65 on Friday. But she closed out the weekend 71-74.

Thomas Aiken awakens to collect first win in his homeland
Starting Sunday four shots back, South Africa’s Thomas Aiken dropped in an eagle 3 on No. 3 and closed with two late birdies to edge Oliver Fisher at the Africa Open in Eastern Cape, South Africa. Birdies at 15 and 16 helped Aiken force a playoff, which he won with a 30-foot birdie putt on the first playoff hole. That makes Aiken the 10th home winner in the past 13 European Tour events played in South Africa. It goes down as his third tour title but first with his wife, Kate, on his bag as caddie, a job she was doing for him for the first time.