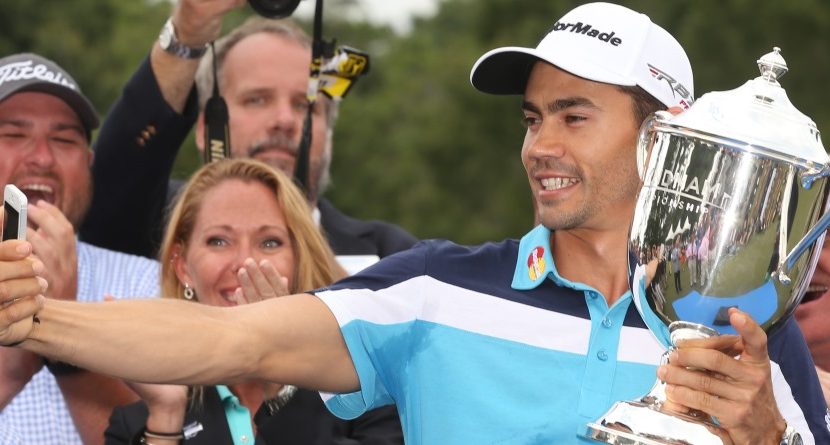 Camilo Villegas got back in the winner’s circle, so did Inbee Park in a major way, and so did Bernhard Langer for the fifth time this year. Here’s a look back at the weekend in golf:

Camilo Villegas’ 63 good enough for win
Camilo Villegas opened the Wyndham Championship with a 7-under-par 63 on Thursday, and then closed with the same number on Sunday – good enough to collect his first PGA Tour title since 2010. The Colombian started the day five shots off the lead, but quickly carded four birdies and an eagle on the front nine. He snagged another birdie at 15 to with pars everywhere else, and went to the clubhouse with a 17-under 263. That ended up holding up as Bill Haas and Freddie Jacobson came up a stroke shy. The win marks Villegas’ fourth in his PGA Tour career.

Bae in, Thompson out, Slocum agonizingly short
With the end of the Wyndham Championship comes the end of the PGA Tour’s 2013-14 regular season, as only the top 125 players advance to the FedExCup playoffs starting Thursday. So some players were watching the scoreboard for more than just the players at the top. The only guy to play himself into the playoffs was Sang-Moon Bae, who jumped from No. 126 to 120 after tying for 14th. The guy who played himself out was Nicholas Thompson, dropping from 123 to 126 after a T-70. Robert Allenby missed the cut, but fell only three spots to be the last man into the playoffs.

The cruelest day was had by Heath Slocum, who finished two shots off the lead in fourth place, easily his best finish of the year. He collected 135 points, but that left him 20 shy of getting into the playoffs. Had Slocum finished one stroke better – making par on one of his final two holes instead of bogey on both – he would’ve placed inside the top 125.

Inbee Park nabs major No. 5
Last year was the Year of Inbee Park, as she won three majors and vaulted to No. 1 in the world. This year has been the Year of the Americans, as Lexi Thompson, Michelle Wie, and Mo Martin claimed the first three majors, while Stacy Lewis ascended to No. 1 in the world. But Park jumped back into the conversation Sunday by outlasting another American, Brittany Lincicome, on the first hole of a playoff at the Wegmans LPGA Championship. It marks Park’s fifth career major, and second straight at the LPGA Championship. Lincicome, playing in the final group, had the lead all to herself on the 72nd hole, but she three-putted for bogey to drop into a playoff on the same hole.

Sutherland makes history, Langer takes the title
Kevin Sutherland made history on Saturday at the Dick’s Sporting Goods Open when he became the first Champions Tour player to card a 59, as he recorded seven birdies and an eagle in his first eight holes. Five more birdies followed on the back nine, and even the surprising bogey on 18 hole kept him under 60. That gave Sutherland a one-stroke lead going into Sunday, but it quickly evaporated when he made four bogeys before his first birdie at No. 11. The hottest player on the senior circuit, Bernhard Langer, took over from there, posting a 6-under 66 to take the win by a stroke over Woody Austin and Mark O’Meara. It’s Langer’s fifth Champions Tour win of the year. Sutherland, meanwhile, took a Sunday 74 and finished tied for seventh, four shots behind Langer.

Scotland’s Marc Warren wins Made in Denmark
Marc Warren and Bradley Dredge entered Sunday tied for the Made in Denmark lead, but it was Warren who walked with the victory. Despite a bogey on 18, Warren beat Dredge by two strokes for a 9-under 275 total. It’s Warren’s third European Tour title and first since the 2007 Johnnie Walker Championship.

U.S. Amateur crowns lowest-ranked champion ever
By leading from start to finish, Gunn Yang became the lowest-ranked player (No. 776) to ever win the U.S. Amateur. The 20-year-old South Korean who plays at San Diego State defeated Canada’s Corey Conners (ranked No. 44) 2 and 1 for his first win in a while. “I had not won a tournament in a long time, maybe like five or six years,” Yang said.