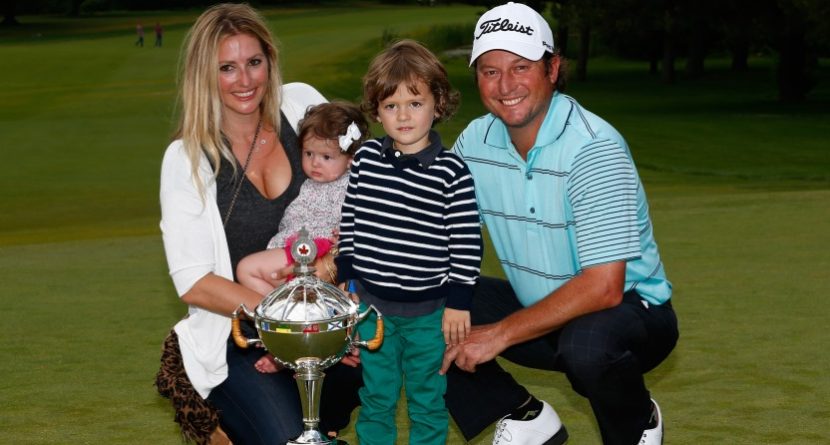 First-time winners has been a trend all season, but not this weekend. This was a weekend for veterans adding another long-awaited win, a senior’s legend growing, a new matchplay format for the women, and a successful return to the U.S. Here’s a look back at the weekend:

Tim Clark catches Jim Furyk for second PGA Tour win
Jim Furyk, with a three-shot lead entering the final round Sunday at the RBC Canadian Open, knew that if he could shoot a few strokes under par, he’d be tough to catch. His bogey at the fifth hole didn’t help, but a birdie at the seventh got him back to even par for the day. Furyk would go on to par the next nine holes, finally grabbing a birdie at 17. By then it was too late, as his playing partner, Tim Clark, had collected five birdies on the back nine to take the lead, including one at 17 to match Furyk. They both made par on the 72nd hole, giving Clark a one-stroke victory after carding a final-round 5-under 65. That’s the second PGA Tour win for the 38-year-old South African, with his first coming at the 2010 Players Championship.

Bernhard Langer continues German dominance
Reminiscent of another German domination in June at the U.S. Open (by Martin Kaymer), 56-year-old Bernhard Langer absolutely crushed the field at the Senior Open Championship. Kaymer walked away with an eight-stroke victory; that was the margin Langer took into Sunday. By the end of the day, he’d extended it to 13, the largest margin of victory in a senior major. It marks the second such victory in a month for Langer, who claimed the Senior Players Championship on June 29. The win marks the fourth career senior major for Langer (who twice won the Masters as a “youngster”), joining victories from the 2010 Senior Open Championship and U.S. Senior Open. Those titles came a mere week apart.

David Horsey holds on for the W
Damien McGrane and his seven birdies on Sunday seemed destined to take the European Tour’s Russian Open. But his first bogey of the day on his last hole dropped him into a playoff, where he promptly bogeyed again. He lost on the first playoff hole to David Horsey, who topped the leaderboard after the first two rounds and was tied for the lead entering Sunday. He made eagle on the 17th hole, then par on the final one to get into the playoff. Horsey then two-putted for par on the first hole, while McGrane bogeyed after finding his ball in a greenside bunker. It marks Horsey’s first European Tour win in three years.

Jarrod Lyle’s quest begins on good note
Playing on U.S. soil for the first time since February 2012, two-time cancer survivor Jarrod Lyle tied for 11th at the Web.com Tour’s Midwest Classic. He carded all four rounds in the 60s, finishing at 11 under par and eight shots behind winner Zack Sucher. Lyle collected $12,300 and now will take a week off before playing the Price Cutter Charity Championship Aug. 7-10 in Springfield, Mo. Then it’s on to another Web.com Tour event, the News Sentinel Open Aug. 14-17. After that, it’s preparation time for Lyle’s PGA Tour return: the Frys.com Open, which kicks off the 2014-15 PGA Tour season in October.