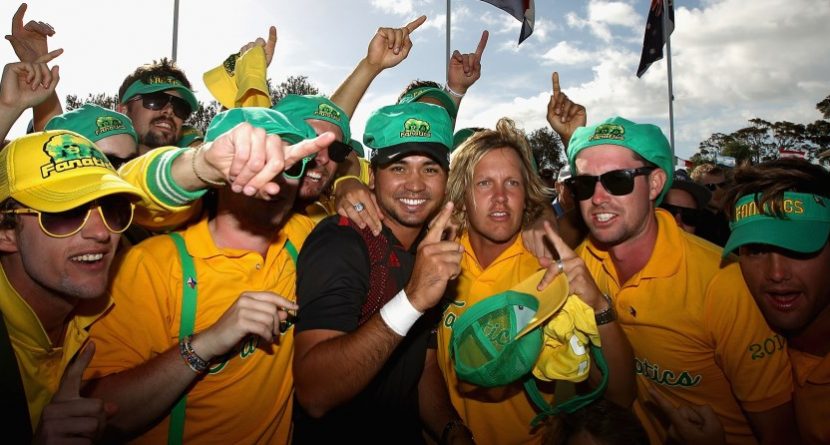 In golf, some wins are nice, but not that memorable (Tiger Woods owns a few of those). Other times, a victory stands out as significant, even if it doesn’t come in a seemingly significant event. And then there are instances where triumph comes despite not even winning.

This all makes sense when you take a spin through this weekend’s events:

Jason Day wins World Cup with heavy heart
The 26-year-old Australian has been one of the best players at majors over the past few years (four top-five’s since 2011) but he hadn’t won any event since 2010. That drought ended Sunday in his homeland at the World Cup of Golf at Royal Melbourne. Day shot a 10-under 274 to win a tournament he almost didn’t play after his grandmother and seven other relatives died in the Nov. 9 typhoon that struck the Philippines. Day bested Thomas Bjorn by two strokes and countryman Adam Scott by three. Day and Scott’s combined 17-under score gave Australia the team title, 10 shots ahead of the U.S. (Matt Kuchar and Kevin Streelman).

Shanshan Feng takes LPGA finale, Stacy Lewis takes Vare Trophy
The LPGA Tour season came to a close Sunday in Naples, Fla., with the CME Group Titleholders, which offers the biggest winner’s check in women’s golf: $700,000. China’s Shanshan Feng collected that ransom with a 15-under 273, her final-round 66 topping American Gerina Piller by a stroke. Five shots back in a tie for sixth was another American, Stacy Lewis, whose 10-under score earner her the Vare Trophy for the tour’s lowest scoring average. She’s the first U.S. player since Beth Daniel in 1994 to claim that honor. South Korea’s Inbee Park, winner of six events this season (three majors), won the LPGA Tour money title. Luke Donald grabs first victory in a year
The Brit was the top-ranked golfer in the world as recently as 2011. Since, he’s dropped down to No. 17. But he won the Dunlop Phoenix on Sunday in Miyazaki, Japan, for his first victory since winning the same tournament last year. He gets $400,000 for the win – his biggest check since September 2012 – but more deliciously, he also receives 200 pounds of Miyazaki beef. That meat, which comes from cows raised on beer and sake, is worth roughly $80,000. Mrs. Donald was quite excited.