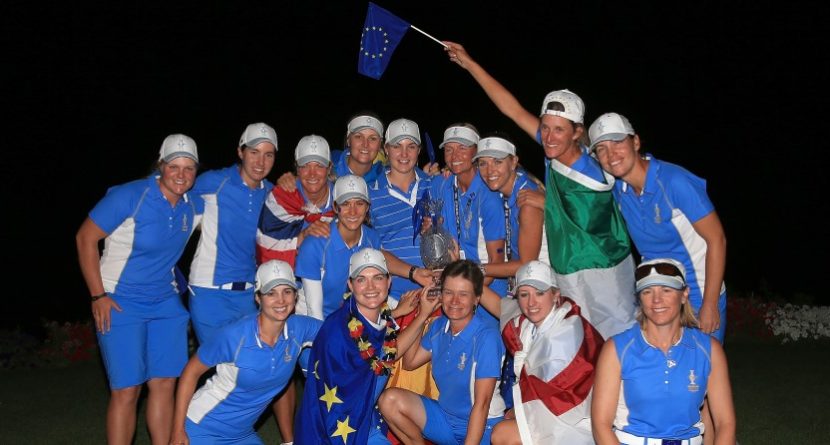 Out in Colorado, Europe bested the Americans for the first time in Solheim Cup history, and down in North Carolina, the PGA Tour welcomed another first-time winner to its ranks. Here’s a look back at the weekend in golf:

European women crush U.S.
All the signs favored the American women: They were playing on a U.S. course, where Europe had never won in the 23-year history of this biennial Europe vs. the United States team event; half of the European team was made up of Solheim Cup rookies; and the cumulative world ranking of the American players bettered that of the Europeans. But then they started playing golf.

Buoyed by an incorrect ruling on Friday at the Colorado Golf Club in Parker, Colo., which helped stake them to a 5-3 lead, the Europeans rolled over the Americans on Saturday, winning every one of the fourballs matches, and took a 10.5-5.5 lead into Sunday. Aided by a 5&4 victory by 17-year-old Charley Hull, the youngest player in Solheim Cup history, over Paula Creamer on Sunday, Europe cruised to a 18-10 triumph, the event’s largest margin of victory ever. Reed wins Wyndham in playoff
Meanwhile, a much closer match was being had in Greensboro, N.C., at the PGA Tour’s Wyndham Championship at Sedgefield Country Club. After Jordan Spieth – the 20-year-old who won the John Deere Classic a month ago – birdied four of the last seven holes, Patrick Reed bogeyed 16 to fall back into a tie, but held on to his 14-under-par score to force a playoff. At one point on the back nine, Reed owned a three-shot advantage.

Spieth appeared to give the title to Reed on the first playoff hole with an awful drive, but he saved par with a fantastic 25-foot putt. Reed then appeared to hand the tourney over to Spieth with an awful drive on the second playoff hole, but his approach shot from the trees – his ball was sitting on pine needles – stuck seven feet from the hole. Spieth couldn’t sink a 10-footer for birdie, but Reed dropped his, then picked up his wife, Justine, who also serves as his caddie.

“It was the best shot of my life, that’s for sure,” Reed said. “One of the best shots I’ve ever witnessed,” Spieth said.

The win makes Reed the 12th first-time winner on tour this year. The 24-year-old Texan collected $954,000 for the win, more than he earned in 2011 and 2012 combined. And the 500 points that come with the victory pushed him from 78th to 22nd in the FedEx Cup standings, the playoffs for which begin Thursday with The Barclays at Liberty National in Jersey City, N.J.

No one who began the week outside the standings’ top 125 jumped inside (and thus, into the FedEx Cup playoffs) after the Wyndham, but Robert Streb’s T-33 (-3) moved him from 133rd to an agonizingly-close 126th. He ended up 10 points behind Ben Crane; had Streb finished two strokes better at Sedgefield, he would have been in.