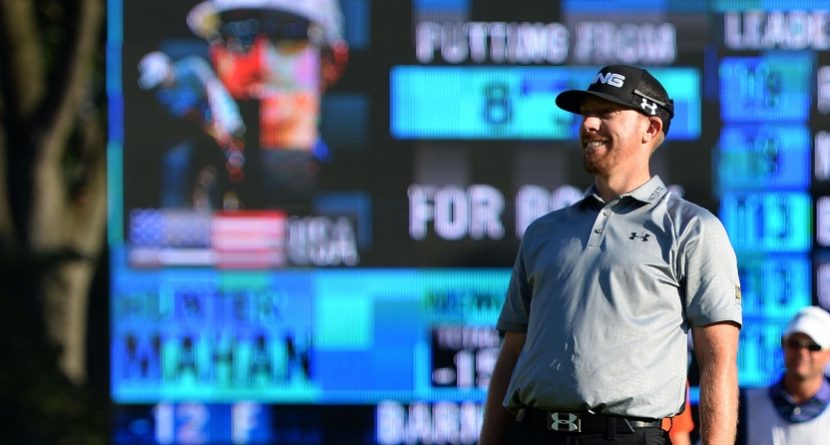 It was a big weekend for long-awaited wins. Hunter Mahan snapped a winless streak of more than two years, as did So Yeon Ryu, and Jamie Donaldson ended a drought of more than a year and a half.

Here’s a look back at the weekend in golf:

Hunter Mahan’s back 9 birdie run clinches The Barclays
Hunter Mahan entered The Barclays ranked 62nd in the FedExCup standings, indicative of the frustrating year he’s had. That meant he had work to do if he wanted to get into the Tour Championship and maintain his status as the only player to never miss a FedExCup playoff event since the series’ inception in 2007. That streak will continue. With five birdies on the back nine, including three in a row at Nos. 15-17, Mahan is now No. 1 in the FedExCup standings. He carded a final-round 65 on Sunday to beat Stuart Appleby, Cameron Tringale and Jason Day by two strokes. The $1.44 million victory is Mahan’s first since April 2012, and it just may convince U.S. Ryder Cup captain Tom Watson to include Mahan on the squad next month.

FedExCupdate
Of course, with the FedExCup playoffs, it’s not only the action at the top of the leaderboard that warrants attention. From The Barclays, the top 100 in the FedExCup standings move onto the Deutsche Bank Championship. Mahan and the trio that finished second all made big jumps in the standings, as did William McGirt (81st to 35th) and Ernie Els (91st to 39th), who tied for fifth with Matt Kuchar (who stayed at fourth in the standings). Despite missing the cut at The Barclays, Geoff Ogilvy will move on at No. 100. By missing the 54-hole cut, Phil Mickelson dropped from 45th to 57th. And Rory McIlroy played a solid tournament, but he was never in contention to win his fourth tournament in a row. He tied for 22nd at 5-under (74-65-70-70) and dropped to second in the FedExCup standings behind Mahan.

So Yeon Ryu holds off compatriots in Canadian Women’s Open
South Korea has won a ton of tournaments in the past few years on the LPGA Tour, but not since August 2012 had So Yeon Ryu contributed. The 2011 U.S. Women’s Open winner joined the party Sunday, setting a tournament record at the Canadian Women’s Open by carding a 23-under 265. In doing so, she held off compatriots Na Yeon Choi (-21) and Inbee Park (-18). That meant Park dumped champagne on Ryu, instead of the other way around. “I’ve been waiting so long for the champagne,” Ryu said. “I was ready to get champagne. I put champagne on Inbee maybe more than five times. Finally, she gave it to me.”

Jamie Donaldson grabs a spot on European Ryder Cup team
While U.S. golfers are done earning points to book a spot in the Ryder Cup – all that’s left to finalize the team are three captain’s picks – European players are still jockeying for position. Wales’ Jamie Donaldson grabbed one of those berths by winning the Czech Masters on Sunday with a 14-under 274. It’s his third career European Tour victory, and first since January 2013. Donaldson’s countryman, Bradley Dredge, led after three rounds but finished two shots off. Still, that made for the first 1-2 Welsh finish on the European Tour.

Scott Dunlap nabs first career Champions Tour win
With a birdie on the first playoff hole at the Boeing Classic on Sunday, Scott Dunlap recorded his first win on the Champions Tour, and his first win anywhere in more than six and a half years. He edged Mark Brooks on the extra hole after the two sat tied at 16-under. Brooks carded a 7-under 65 to force the playoff after Dunlap posted a 68. Dunlap rolled in three birdies on the back nine, but he shot the round of the tournament on Saturday, when he carded seven birdies and an eagle en route to a 9-under 63. Dunlap never won in seven seasons on the PGA Tour.