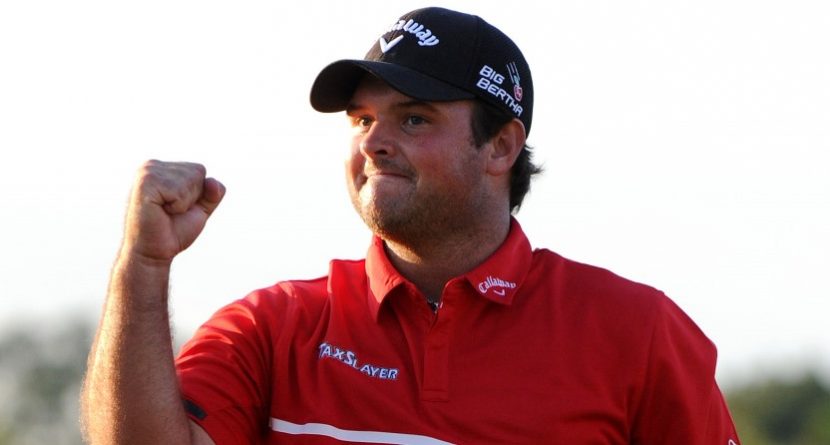 A man in red and black won on Sunday, and so did the No. 1 player in the world. Neither were Tiger Woods. Here’s a look back at what transpired over the weekend:

Patrick Reed dresses like Tiger, believes he’s nearly as good
There’s no rule that says only Tiger Woods can wear a red shirt, black pants and a black hat on Sundays; it’s just his thing. But it’s also Patrick Reed’s thing. It takes a rather self-assured golfer to mimic the look of his generation’s best player, and that’s exactly what Reed is.

After the 23-year-old won the WGC-Cadillac Championship on Sunday for his third career PGA Tour victory – all of which have come since August – he told a live NBC TV audience: “I’ve worked so hard, I’ve won a lot in my junior career, did great things in (my) amateur career … and now I have three wins out here on the PGA Tour. I just don’t see a lot of guys that have done that, besides Tiger Woods, of course, and, you know, the other legends of the game. It’s just one of those things, I believe in myself and – especially with how hard I’ve worked – I’m one of the top five players in the world.”

Well, he’s right if you’re talking FedExCup season points, as Reed is now third in those standings. And he’s right if you’re talking about wins this season, as he and Jimmy Walker are the only players to have multiple wins so far on the PGA Tour (Reed also won the Humana Challenge in January). But he’s never checked in better than 20th in the world golf rankings, a point he reached Sunday with this win. And Reed has never even appeared in a major; next month’s Masters will be his first.

But Reed is also a top-five player in the world if you’re talking about players who have three PGA Tour victories before turning 24. He joins a short list that includes only Woods, Phil Mickelson, Sergio Garcia and Rory McIlroy.

Tiger Woods came back, then his back issues came back
Woods fired up the golf world Saturday with a sizzling 66, the best score of the day. Despite an opening-round 76 and a 1-over-par 73 on Friday, the stellar round moved him into a tie for fourth entering Sunday. However, the ailing back that forced him to withdraw mid-round a week ago left him in pain for much of the Cadillac Championship final round as well, as he played a birdie-free round with six bogeys. The 6-over 78 is Woods’ worst ever showing at the Trump National Doral course, worsening the mark he set Thursday. On the bright side, the T-25 finish is his best of the season.

Rookie Chesson Hadley triumphs in Puerto Rico
While the big boys were battling the Blue Monster at Doral, a second PGA Tour event was playing out in Puerto Rico. Rookie Chesson Hadley – one of our new favorite players – held the overnight lead at the Puerto Rico Open, and held on all day Sunday for his first career PGA Tour victory. He closed with a 5-under 67 (21-under 267 overall) to beat Danny Lee by a pair of strokes and collect $630,000. More importantly, the win gets Hadley into his first major, the PGA Championship in August. Other perks for his first title: a two-year tour exemption, a spot in the Players Championship (which, along with the PGA Championship, boasts the game’s biggest purse), and an invite to the Tournament of Champions, which kicks off every new year.

World No. 1 Inbee Park gets first win of 2014
With the LPGA Tour off this week, the best woman in the world traveled to Haikou, China, for the World Ladies Championship on the Ladies European Tour. World No. 1 Inbee Park and world No. 2 Suzann Pettersen entered the day tied at 18-under, but Park carded a 6-under 67 (24-under 268 overall) to defeat Petterson by five strokes. If you saw any of the action, you may have noticed that the Mission Hills Hainan Blackstone Course on which they played was the same one where McIlroy defeated Woods in a one-on-one duel last October.