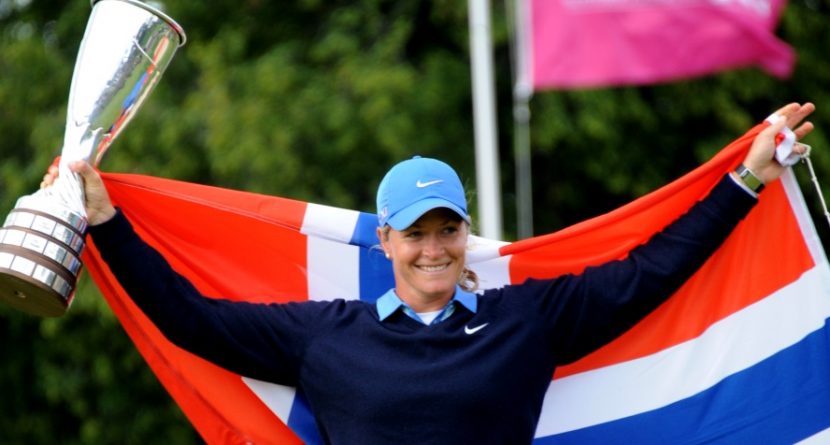 Rain doused the BMW Championship at Conway Farms outside of Chicago on Sunday, delaying the final round until Monday. Only six of the 70 players finished their fourth round, and two dozen guys atop the leaderboard didn’t even tee off. Jim Furyk, who fired a 59 on Friday, holds a one-shot lead over Steve Stricker.

But they were able to complete golf tournaments elsewhere, even if some weren’t “complete.”

Pettersen wins rain-shortened Evian Championship
Norway’s Suzann Pettersen picked up her second career major at the first-time major. The Evian Championship in Evian-Les-Bains, France, made its debut on the ladies’ major circuit, and Pettersen’s 3-under 68 on Sunday clinched a two-shot win over 16-year-old amateur Lydia Ko, who would’ve become the youngest major champion had she won. Also seeking history was Inbee Park, who was vying to become the first pro golfer to win four majors in one season. She finished tied for 67th at the Evian, which played out Friday-Sunday after Thursday’s first round was canceled due to rain.

Noh nets a PGA Tour card
Rain was not an issue in Columbus, Ohio, where the third of four Web.com Tour Finals series events took place, the Nationwide Children’s Hospital Championship. South Korea’s Seung-Yul Noh collected a five-stroke victory, which gave him $180,000 and the series lead with $210,125. That secures a PGA Tour card for the 22-year-old and allows him to skip the series-ending Web.com Tour Championship in two weeks.

Luiten outlasts Jimenez
Across the pond, Joost Luiten bested the most interesting golfer in the world – i.e. Miguel Angel Jimenez – on the first playoff hole at the KLM Open on Sunday. It marks the Dutchman’s second European Tour title this year – he’s the first from his country to do that – and the first Dutch winner of the Netherlands’ national open since 2003.