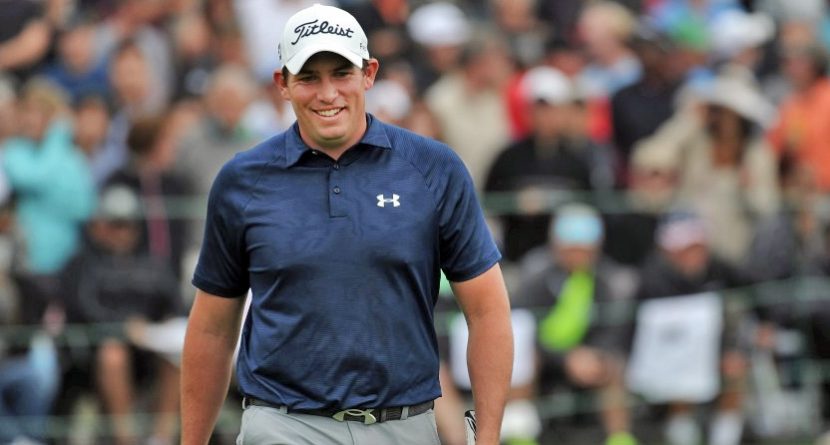 Tiger Woods was gone after three rounds, Phil Mickelson after two, and Scott Stallings fended off a pack of five for the victory at the Farmers Insurance Open at Torrey Pines. Here’s a look back at the weekend on the PGA, European, and LPGA Tours:

Stallings Secures 1-Shot Triumph
Half a dozen guys found themselves with chances to win on Sunday at Torrey Pines, but none could go as low at Scott Stallings. The 28-year-old, who entered the week ranked 112th in the world, carded a 4-under 68 (9-under 279 overall) to beat five guys by one stroke. Stallings birdied his final hole after reaching the par 5 in two, then collected $1.1 million when no one could catch him. It marks his third career PGA Tour victory, and first since 2012, but the largest payday of his career. And it gets him back into the Masters.

Sergio Surges to Another Win
Sergio Garcia snapped his winless drought by picking up a victory in Thailand last month, his first win in all of 2013. Two starts later, he already has his first win of 2014. The Spaniard bested Mikko Ilonen on Saturday on the third hole of a playoff in the European Tour’s Qatar Masters, completing a comeback from three shots down to start the day. Garcia’s birdies on half of his final 12 holes got him into the playoff, and he dropped three more birdies in the playoff. The third one was the charm.

Korda Collects Second Career Title
Twenty-year-old Jessica Korda posted a 7-under 66 in Sunday’s final round of the Bahamas LPGA Classic, including a birdie on 18 to defeat world No. 3 Stacy Lewis by one shot. Korda’s approach shot on 18 came to rest against the stands, but still was still able to putt after taking relief. Her two-putt birdie clinched her first win since the 2012 Women’s Australian Open, when she also edged Lewis, that time in a playoff.

Tiger and Phil Leave Early
There was a buzz around Torrey Pines all week with Tiger Woods making his 2014 debut, and Phil Mickelson playing his first U.S. event of the New Year and showing loads of confidence. But then Mickelson tweaked his back on Thursday, still shot a 3-under 69 and came back Friday, but then withdrew because of the back following a second-round 73. Woods, meanwhile, snuck into Saturday just ahead of the cut line (72-71), but then just missed carding an 80. Nonetheless, his 7-over 79 forced him to miss the first secondary cut of his career – at a course on which he’s won eight times.

Pat Perez a Stroke Short on Home Course
As dominating as Woods has been at Torrey Pines, Pat Perez knows the grounds even better considering he worked there as a kid, he calls this event his “fifth major,” and his father is the starter on the first tee of the Farmers. The 37-year-old ended up in the five-way tie for second, just one shot shy of forcing a playoff. It would’ve been Perez’s second career PGA Tour win, and first since 2009.