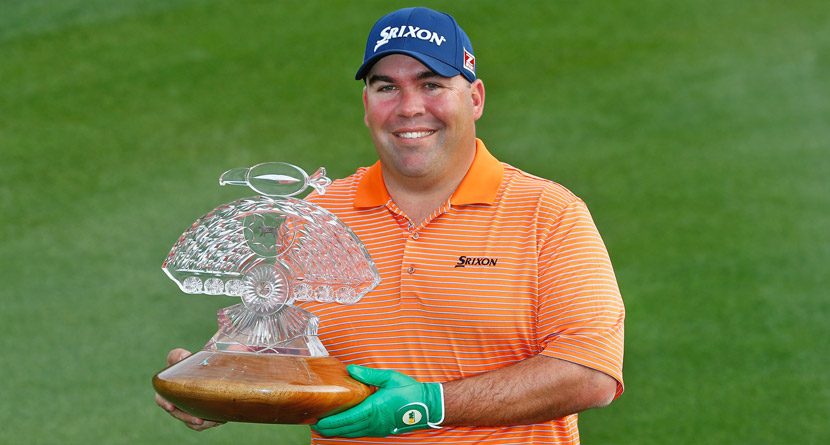 While most people had their eyes on the Meadowlands in New Jersey for the big game between the Broncos and Seahawks, there was plenty of golf keeping the masses entertained earlier in the day on Sunday. From a record-setting win in Dubai to a come-from-behind first career victory in the Arizona desert, the week that was in professional golf had a little bit of everything.

Kevin Stadler picked up his first career PGA Tour win at the Waste Management Phoenix Open on Sunday, outlasting 2012 Masters champ Bubba Watson and Canadian star Graham DeLaet. The win locks Stadler in the field for the 78th Masters Tournament this April, where he will join his father, 1982 Masters champion Craig Stadler. The win also makes the Stadlers the ninth father-son duo to win on the PGA Tour.

Stephen Gallacher became the first man to successfully defend at the Omega Dubai Desert Classic after shooting a final-round 71 on Sunday. Gallacher’s win was the third of his career and was due in large part to his epic run on Saturday afternoon, when he played the back nine in a European Tour record-tying 28. Gallacher held off Rory McIlroy and Brooks Koepka, among others, to claim victory and vault himself into the top 40 on the Official World Golf Rankings.

World No. 1 Tiger Woods made some early-season improvements in Dubai after struggling last week at Torrey Pines. On the heels of missing the weekend cut at the Farmers Insurance Open, Tiger made the cut in the desert this week and finished T-41, finishing 6-under par for the week. Woods proved once again why he’s the best player in all the land, salvaging a decent week even when he didn’t have his A-game. Woods hasn’t officially announced when he will play next.

Despite entering Sunday with a two-stroke lead, Bubba Watson was unable to hold on and capture his first PGA Tour crown since the Masters in 2012. Watson missed short putts on 16 and 18 on Sunday, either of which would have placed him into a playoff with eventual champ Kevin Stadler. Not all was lost for Bubba, who stayed hot on the 2014 season, notching his second top-three finish this season.

Mi Hyang Lee of South Korea collected her first professional win at the ISPS Women’s New Zealand Open, besting phenom Lydia Ko and a pair of Americans, Beth Allen and Anya Alvarez. Lee set a new course record by shooting a 9-under-par 63 in the final round, beating the previous record of 64 set by Seon Woo Bae. Lee said after the win, “It’s my best score in my life,” and that she was, “so happy” to collect her first professional win.