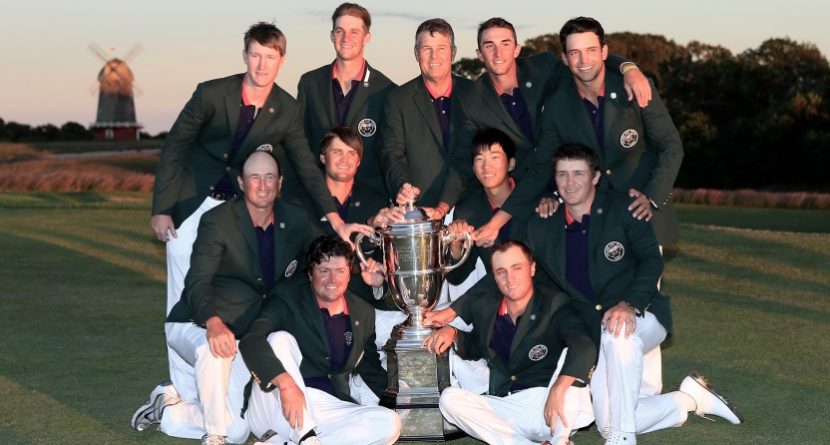 While you were busy watching Michigan cram 115,109 people into its football stadium, or Colin Kapernick rack up 412 yards and three touchdowns, or the other Manning brother toss four TDs to give his family 11 in the NFL’s opening week, you missed some good golf.

It wasn’t played by the top pros, because they enjoyed a weekend off. But it was played by some pros hoping to join those top pros, and by some amateurs who hope to become pros. Here’s what you may have missed from the weekend:

Americans take back Walker Cup
The U.S. could not claim the Ryder Cup last fall, or the Solheim Cup last month, but the American male amateurs defeated Britain and Ireland on Sunday for the Walker Cup. They took seven of the 10 afternoon singles matches to roll over the Europeans 17-9. That seized control of the cup back from Britain and Ireland, who won the 2011 event, and moved the Americans’ all-time record to 35-8-1.

Svoboda peels open Chiquita Classic win
Though he already had a PGA Tour card in the bag due to finishing 25th on the Web.com Tour money list, Andrew Svoboda went ahead and won Chiquita Classic for good measure. He collected a $180,000 check by besting Will MacKenzie on the first playoff hole. The event was the second tournament in the four-event Web.com Tour Finals series, after which 25 PGA Tour cards will be handed out.

Bjorn born to win
Across the pond in Europe, Thomas Bjorn of Denmark captured the European Masters title – also on the first playoff hole – by holding off Craig Lee. It marked Bjorn’s first title since winning on the same Crans-Sur-Sierre, Switzerland, course in 2011, and his 14th career European Tour title. The 42-year-old earned $483,000 for the victory.

Seniors need playoffs too
It took three playoff holes, but Esteban Toledo of Mexico chipped in for birdie to defeat Kenny Perry at the Montreal Championship on Sunday. That gives the 50-year-old his second Champions Tour win this year, both of which came on a third extra hole. And Toledo fended off one of the world’s hottest golfers; Perry won the Senior Players Championship and U.S. Senior Open in June and July.