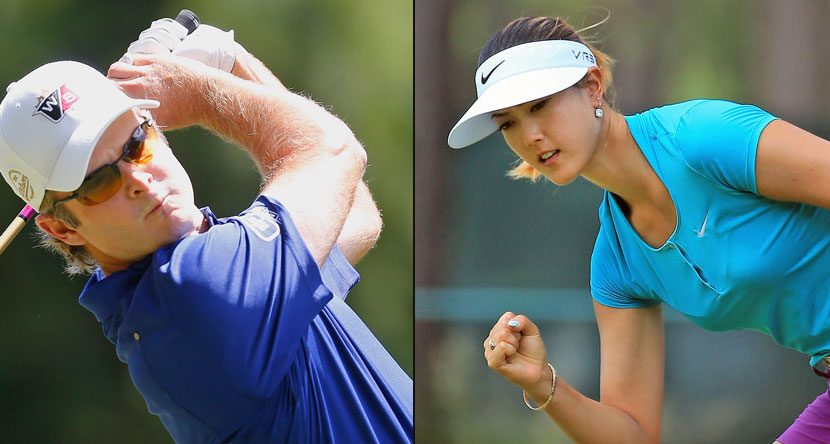 Michelle Wie collected her first major, Kevin Streelman rolled in a record number of birdies, and Mikko Ilonen went wire-to-wire in Ireland. Here’s a look back at the weekend in golf:

Michelle Wie breaks through for first major
She was 15 when she held part of the 54-hole lead at the U.S. Women’s Open. She was 16 when she tied for third at the national championship. And she was 24 when she finally captured her first major, following 10 career top-10 finishes in major tournaments. Wie carded an even-par 70 Sunday to finish 2-under overall, the only score that beat par for the tournament. She began the final round tied for the lead with Amy Yang, and Wie actually started with a bogey. But she carded an eagle 3 at No. 10, nearly saw her lead evaporate with a double-bogey at 16, but then responded with a clutch 25-foot putt on 17 to take a two-shot lead to the final hole, which she parred. Wie collects $720,000, the largest check in women’s golf history, and a pretty slick trophy:

All buckled in!!!!! #safetyfirst @Kia pic.twitter.com/H8rLRaKJ5H

Kevin Streelman closes with seven birdies
Kevin Streelman posted six birdies in his final 12 holes on Saturday, carding a 6-under 64. That little birdie binge was nothing compared to his run that closed out the Travelers Championship on Sunday. He circled seven birds on the final seven holes to post another 64 and break the tour record for consecutive closing birdies by a winner (Mike Souchak had six in the 1956 St. Paul Open). That gave Streelman a 15-under 265 for a one-stroke victory over Sergio Garcia and K.J. Choi, and a winner’s check worth $1.1 million. It marks Streelman’s first PGA Tour win since last year’s Tampa Bay Championship, and erases any frustration stemming from four straight missed cuts leading into the Travelers.

Mikko Ilonen sets course record, collects Irish Open
With an opening-round 7-under 64, Mikko Ilonen set a course record at Fota Island Golf Club in Cork, Ireland. The Finn closed with a final-round 70 on Sunday to claim a wire-to-wire win at the European Tour’s Irish Open. His 13-under 271 was one shot better than Italy’s Edoardo Molinari. Graeme McDowell, the Northern Irishman, was the crowd favorite, but he tied for sixth and again missed out on winning his first Irish Open. The other crowd favorite, Rory McIlroy, didn’t play over the weekend after posting a +1 through two rounds and missing the cut by one stroke.

Tom Lehman captures Encompass Championship
The 1996 Open Championship winner needed every last bit of the three-stroke lead he took into Sunday to close out the Champions Tour’s Encompass Championship. Tom Lehman sank a 12-foot birdie on the 72nd hole to post a 15-under 201, one stroke ahead of Michael Allen and Kirk Triplett. It marks Lehman’s eighth title on the senior circuit and first since 2012.