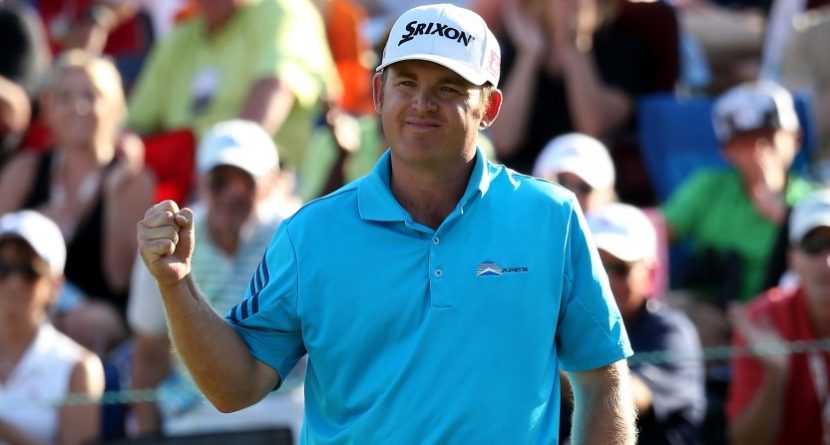 J.B. Holmes gets first W in six years
This could go down as the most triumphant victory of the PGA Tour season, as J.B. Holmes captured his first tour win since 2008. He underwent brain surgery twice in 2011 to repair structural defects in his cerebellum, and returned in early 2012. But he practiced too much in trying to make a hasty comeback and injured his elbow, which hampered him up until he broke his ankle while rollerblading in 2013. Another surgery fixed the elbow while Holmes was out with the bum ankle, and he got back on tour this year via medical exemptions. He won’t have to worry about those anymore after securing his PGA Tour card on Sunday by posting a 14-under 274 to win the Wells Fargo Championship. He bogeyed 16 and 18, but that was still one stroke better than Jim Furyk, whose 7-under 65 put him in contention but not the top spot.

Mickelson, McIlroy give us a tease
Things were looking good Thursday evening for the two biggest names at the Wells Fargo Championship, as Phil Mickelson carded a 5-under 67 to sit one shot back and Rory McIlroy posted a 3-under 69 to sit in striking distance. Then they both bombed on Friday – Mickelson with a 75, McIlroy a 76. The gents made the cut and then went low again on Saturday (Mickelson 63, McIlroy 65), but then faltered again on Sunday. Mickelson stumbled to a 4-over 76 and finished T-11. McIlroy sank a couple birdies late to finish up T-8 overall after a 2-under 70 on Sunday.

Stacy Lewis’ strong season finally features a win
Much has been made the past month on the LPGA Tour about Michelle Wie’s resurgence, Lexi Thompson’s emergence, and Lydia Ko’s potential. Those were your winners at the tour’s past three events. But strongest throughout the entire season has been Stacy Lewis, who was finally rewarded with a win on Sunday at the North Texas LPGA Shootout. She crushed the field by six strokes to collect her ninth career LPGA Tour victory, which will move the reigning Women’s British Open champ to No. 2 in the world ranking behind Inbee Park. But Lewis is now No. 1 on the LPGA season money list, in the Race to the CME Globe standings, in scoring average and in top-10 finishes. Bernhard Langer is making Champions Tour history
In eight officially sanctioned pro events this year, Bernhard Langer’s worst finish is T-8 – and that came against a bunch of young bucks at the Masters. The 56-year-old’s other seven starts have come on the Champions Tour, where a T-7 marks his poorest outing. Everything else has been in the top three, and Sunday gave Langer his second victory of the year. He won the Insperity Invitational by one stroke over Fred Couples, making Langer the 10th player in Champions Tour history with 20 wins. The $300,000 check that comes with the triumph also makes him the first senior player to pass $1 million in one season.