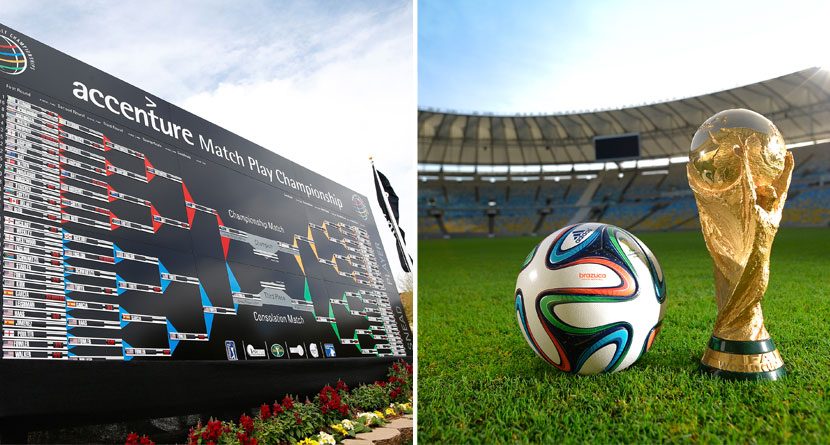 The WGC-Match Play Championship will be heading north from Arizona to San Francisco in 2015, and it’ll be bringing a new look with it. PGA Tour commissioner Tim Finchem and PGA of America President Ted Bishop announced on Wednesday that the championship will be played at TPC Harding Park, and it’ll adopt a new “World Cup-type” format.

Rather than the usual 64-player bracket, the tournament will feature a style similar to the World Cup, bringing a round-robin stage to golf. The 64 players will be split into 16 groups of four, where each player will play three matches.

From there, the top player from each group will qualify for the round of 16, which will then be whittled down to eight, four, and eventually, the final two where a champion will be crowned. “We’re going to do it differently next year. It’s going to be a World Cup-type format,” Finchem said. “It’s kind of nice that we’re able to talk about that in the context of everybody in the United States being riveted to that format over the last month in Brazil where we’ll be playing golf in the Olympics for the first time in ’16.”

It’s a change that should benefit all parties involved, because who doesn’t like more golf? I sure do, and so does Lee Westwood.

The new format will not only give fans (and players) a lot more golf, but it’ll help prevent top-seeded players from being eliminated early on, which has happened often in the past.

In the last WGC-Match Play Championship, none of the four No. 1 seeds made it past the second round. Not exactly what golf wants from its headline players.

“It’s a lot more golf,” Finchem said. “There are going to be 96 matches for fans here to go out and watch on Wednesday, Thursday and Friday. Secondly, over time, the best players rise to the top so we think that’ll be positive as it goes into the weekend.”

With all the buzz generated from the World Cup, the announcement couldn’t have come at a better time.

TPC Harding Park will also be hosting the 2020 PGA Championship and the 2025 Presidents Cup, so the West Coast will have plenty of great golf to watch over a 10 year span.