What Really Happens During A Rain Delay? 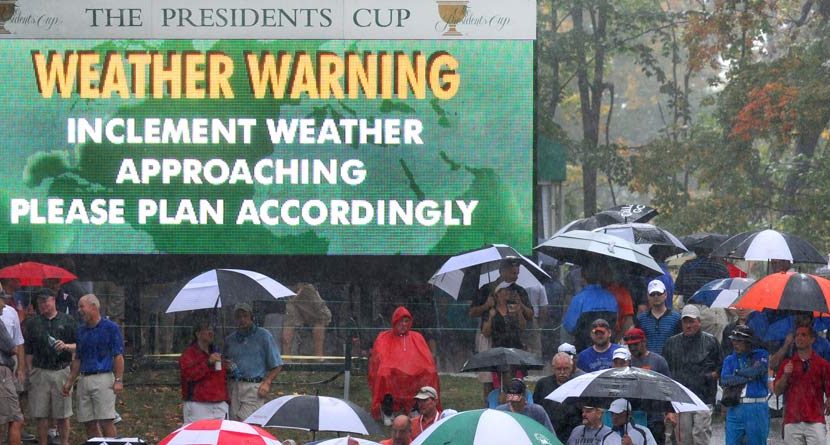 For the players, a seat in family dining is huge. Player family dining is not set up to accommodate all the players in the field at once. Much less their various assembled family members. But if you can find a seat near the buffet, you aren’t going to give it up for anything. There is no hierarchy in family dinning. The 200th player in the world has just as much right to a seat as the No. 1 guy and he isn’t going to give it up for anyone. The food catered to family dining is always exceptional, although you can’t tell it from the waist lines of the modern-day players. But even the most ardent tour dieter is likely to make an extra stop by the dessert table when boredom overtakes the room during a lengthy delay.

For those players who were shuttled from the outer reaches of the golf course back to safety there is little hope of getting a seat at a table. Perhaps a bench in the locker room or a piece of floor somewhere is the most they can hope for as they ride out the storm. But they too will make a pass at the buffet. What else is there to do?

There is an ancient blue law on the PGA Tour forbidding card games during rain delays. Something about a cash game once upon a time that the players didn’t want to break up when the weather broke, because there was more money on the table than in the purse for the event. Whether or not there is any truth at all to that story almost doesn’t matter. It is certainly feasible when you look back at the characters that paved the way for the modern game.

While the players sit idly in the confines of a clubhouse designed for half their numbers, the spectators face a totally different dilemma. For those fortunate ones who have access to corporate niceties, a cocktail under cover is more-than-adequate shelter from the storm. Often the most entertaining moments of the week in a corporate chalet are born during weather delays. It keeps the occupants from wondering if the temporary structures are grounded and can withstand strong winds or lightning strikes.

Teams are back at their respective cabins during the delay. Game of choice? Ping-pong for Americans and Daytona racing for #GoINTL team.

For the minions left to their own devices, a soaking may be inevitable but no cause for alarm. The concession stands will still serve a frosty beverage. Unless the property is evacuated, many will stay and withstand nature’s onslaught.

When play does resume, as you might imagine, the atmosphere is completely different. Thousands of over-served fans eagerly anticipate the blowing of the horn to resume play. They cheer it for all it is worth.

From a player’s standpoint, you know that things will be a little louder. Some drunk may say something useless. That is just part of the deal when weather becomes the story at an event. The tournament is a celebration of golf; it is just that some get to celebrate a little more than others.

In case you are wondering, the liquor cabinet remains locked in the media center during rain delays, although I have often felt that the writing would improve and the broadcast would be far more entertaining if the reverse was true. But no one asked my opinion.