What if Miguel Angel Jimenez Wins the Open Championship? 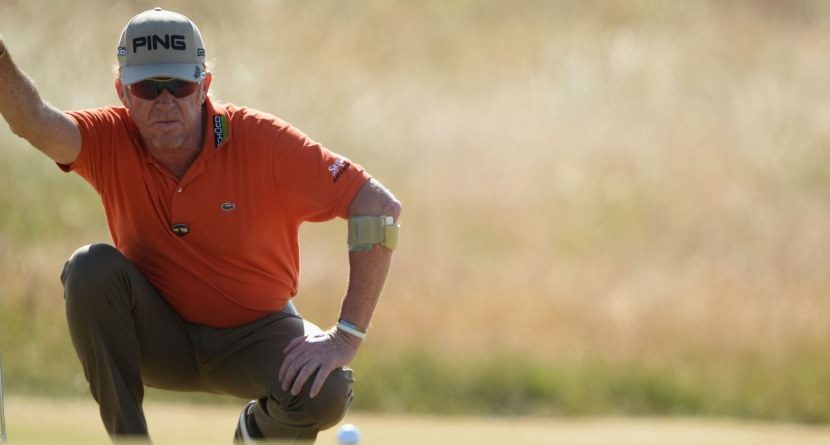 Most golfers these days are fit, health-conscious and well-groomed. Most golfers are not Miguel Angel Jimenez.

Jimenez is 49 years old, from Spain, and has earned nearly $30 million during his 30-year pro career, most of which has been spent on the European Tour. He’s never won one of golf’s four majors, but he’s been in contention. Jimenez owns at least one top-10 result from the Masters, U.S. Open, Open Championship and PGA Championship, his best being runner-up at the 2000 U.S. Open.

And here he is – long, curly ponytail and all – contending at the 2013 Open Championship at Muirfield. He’s the outright leader at 3-under-par through two rounds, one stroke ahead of Tiger Woods, Dustin Johnson, Lee Westwood and Henrik Stenson.

What’s his secret? The cigar? (And that’s just a condensed version of his routine. He released a workout video in May.)

On range after my round Miguel a Jimenez walked past me with aviator sunglasses, cigar and bottle of wine. Maybe he is the coolest man alive

After that exotic warm-up dance by Miguel Angel Jimenez, I’m expecting him to show up tomorrow wearing pantless chaps.

Miguel Angel Jimenez, asked how he’s leading #BritishOpen at 49: “Why? Do I not have the right to do it? Only the young people can do it?”

Should Jimenez actually win at Muirfield, oh wow, the interesting sponsor offers that will come his way.