What To Watch This Weekend: The Weather Outside Is Frightful Edition 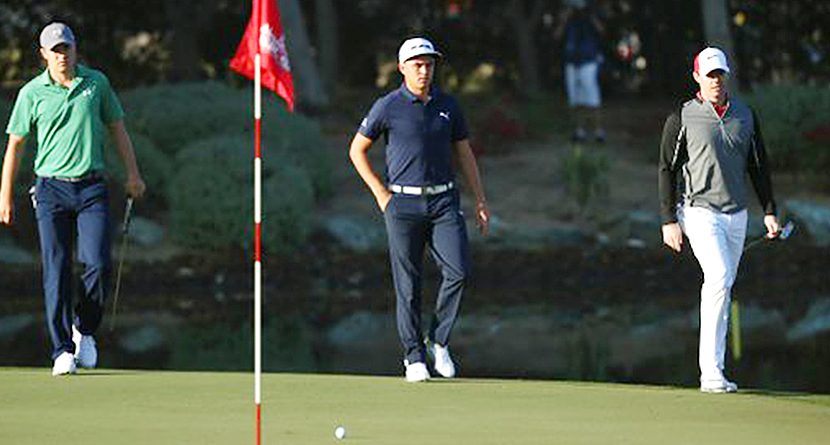 Hopefully by now you’ve been to the store, loaded up on bread, milk and alcohol and you’re ready to weather Jonas this weekend on your couch with your beverage in one hand and your remote control in the other. If we’re being honest, there could be worse weeks to get absolutely pummeled by a winter storm, especially if you’re a sports fan.

For our purposes, we’re in the enviable position that there are two viable options on the golfing calendar this week whose broadcasts don’t overlap. While the PGA Tour is getting into the swing of things on the West Coast, the marquee event of the weekend is taking place 7,000 miles away in Abu Dhabi.

Four of the top six players in the Offficial World Golf Rankings — Jordan Spieth, Rory McIlroy, Henrik Stenson and Rickie Fowler — are in the United Arab Emirates for the Abu Dhabi HSBC Championship. The quartet of stars marks the first time in the 2015-16 wraparound season that more than three of the top-10 players in the game were in the same field.

The Kid, the Swooshed One and High Tops go in 10 minutes on Golf Channel. Get yourself in position.

To add a little more hype, Spieth, McIlroy and Fowler all played together over the first two days of the tournament. However, what makes this whole thing pop even more is that the first-round leader is former Southern Methodist University stalwart Bryson DeChambeau. DeChambeau, who won both the U.S. Amateur last year and the NCAA Individual Championship, is still an amateur and will be at least through the Masters.

(No one’s quite sure how he’s able to travel the globe to play in these events while still maintaining his amateur status, but let’s not let that get us down this weekend.)

Plus, it should be great theatre with the likes of McIlroy, Stenson, Spieth, Branden Grace, Matthew Fitzpatrick and Andy Sullivan all within a few shots. Broadcast times for the AD Championship are:

Stateside, those in the Midwest and on the East Coast under winter storm advisories can take solace in knowing that the PGA Tour is basically golf in a bubble. The CareerBuilder Challenge in partnership with the Clinton Foundation (actual name) is taking place in and around La Quinta, Calif. at the PGA West facility.

While the Abu Dhabi field is stronger from and OWGR standpoint, the CB Challenge has names like Phil Mickelson, Patrick Reed, Zach Johnson, Matt Kuchar and Jason Dufner teeing it up. The tournament is played over a three-course rotation, meaning there won’t be a cut until Saturday afternoon when you’re nice and sauced up and sweating out your fantasy picks for the week. Fun times.

It’s Mickelson’s first start of 2016, so he brings enough entertainment alone. Check out what he did on the Thursday:

Phil Mickelson hit the flag at No. 8 and spun the ball into the hole anyway… #QuickHits https://t.co/IaKhQLvyL7

Your broadcast times for the CB Challenge this weekend are:

Not to mention, there’s the opening even of the Champions Tour this week in Hawaii. Notables in the field at the Mitsubishi Electric Championship at Hualalai include Davis Love III, Miguel Angel Jimenez, Bernhard Langer, Colin Montgomerie, Tom Lehman, Mark O’Meara, Tom Watson, Kenny Perry and Fred Couples. The tournament concludes on Saturday. Coverage follows the PGA Tour broadcast from 7 p.m. – 10 p.m.

As if all that golf isn’t enough to whet your whistle, the NBA, NFL and Australian Open are there to bridge the gap between the live golf.