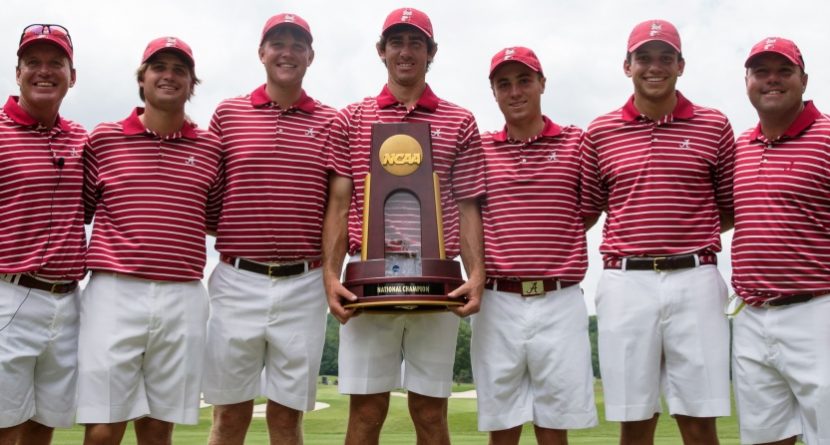 That victory also helped Stanford secure the top seed for the match-play quarterfinals of the NCAA Championships, which continue Tuesday and Wednesday. The Cardinal is seeking its ninth men’s golf national championship.

However, only half of those schools are in the top 25 based on how alumni are faring on the PGA Tour this season. According to RivalsCup.net, Georgia Tech is No. 2 based on PGA Tour earnings among its former players, with Oklahoma State at No. 4, Alabama at No. 14, and Illinois at No. 23.

The Rivals Cup is a website that “promotes the collegiate affiliations of professional athletes by ranking the NCAA programs that are having the greatest impact in professional sports.” In golf, Georgia is No. 1 so far this year with $16,499,448. That’s not much of a surprise considering five former Bulldogs have claimed PGA Tour wins this season (Bubba Watson, Harris English, Russell Henley, Chris Kirk and Brendon Todd).

At No. 3 on the list is UNLV, which moved up a spot after this past weekend’s Crowne Plaza Invitational following former Rebel Adam Scott’s triumph. Rounding out the top five is Baylor, whose ranking is based solely on the earnings of Jimmy Walker, the PGA Tour’s money list leader.

It’s a great list to check out and then figure out who’s contributing the most to that money total. Texas is No. 6 largely thanks to Jordan Spieth; Arizona’s at No. 7 via Jim Furyk; Arizona State is right behind at No. 8 NOT thanks to Phil Mickelson; Florida is No. 9 with help from Matt Every; and unsung Coastal Carolina sneaks into the top 10, thanks completely to Dustin Johnson, who’s No. 3 on the overall money list.

Rivals Cup also ranks conferences based on player earnings, and it’s not far off your average college football power rankings. The SEC is No. 1, followed by the ACC, Big 12, PAC 12, Mountain West and Big 10.

Knowing this, it’s not surprising to see Tuesday’s quarterfinal results from the NCAA Championships: Alabama and LSU of the SEC advanced to the semifinals (knocking off SMU and UCLA, respectively). In the other semifinal, Stanford will take on Oklahoma State (after beating Illinois and Georgia Tech, respectively).

Team Rankings after the Crowne Plaza Invitational at Colonial: