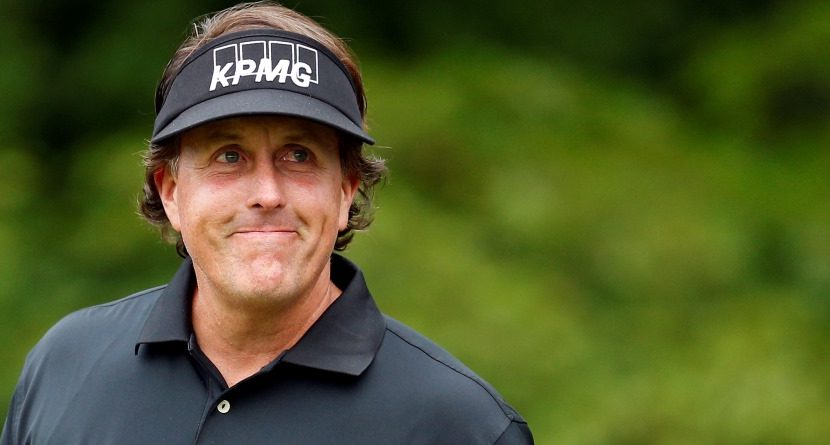 All the signs pointed to a slow start for Phil Mickelson on Thursday at the U.S. Open. Even his first hole suggested as much.

But Lefty ended his first round with the lead, a 3-under 67. (Luke Donald would later move to 4-under through 13 holes before play was suspended for the day, and Adam Scott was 3-under through 11.)

Mickelson had been in the Philadelphia area for less than four hours when he teed off at 7:11 a.m. He stepped off his private plane after flying in from San Diego, where he attended his daughter’s eighth-grade graduation Wednesday night. The lack of sleep implied sluggish play.

Is this why some of his foes gave him the nickname FIGJAM? Because they’re envious of the things he can do that they cannot? Mickelson said he got all the Merion practice he needed when he played the course late last week and early this week. So once thunderstorms rolled in Monday, Mickelson jetted home. He much preferred to practice in better conditions, and since he was planning on flying back west for the graduation anyway, he just left earlier than expected.

California allowed him the fine-tuning time he needed. He then attended his daughter’s ceremony, gave the family hugs and kisses, boarded his plane around 11 p.m. ET Wednesday, caught a few hours of shuteye in the air, then landed around 3:30 a.m. Mickelson snuck in another hour of sleep in Philly before getting over to Merion to warm-up.

But he began with a bogey on 11 (his first hole of the round). That must’ve woken him up. The 42-year-old, whose birthday is Sunday, parred 12, then picked up a birdie at the par-3 13th. He tallied another par at 14 and 15 before more inclement weather forced a delay.

No one may have benefitted more from the stoppage than Mickelson, who was able to get in a nap during the three-and-a-half hour rain delay. Once play resumed, he parred out the remaining back nine, then scored birdies at Nos. 1, 7 and 9.

The 3-under-par ties the second-best start at a U.S. Open in Mickelson’s career. He was 4-under in 1992 before falling apart and missing the cut, and he was also 3-under in 1999, when he went on to place runner-up.

You just never know what to expect out of FIGJAM.