Who Should Be The Next U.S. Ryder Cup Captain? 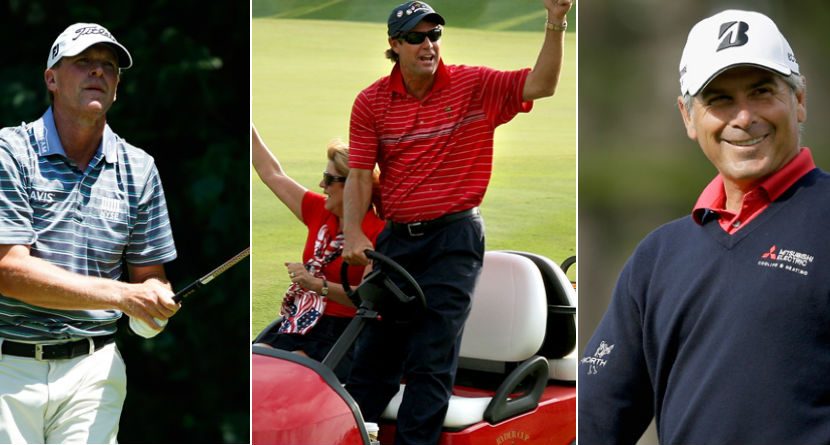 While the sour taste of defeat remains quite fresh in our mouths, the 2014 Ryder Cup is (thankfully) complete. This, of course, gives us the opportunity to look ahead to the future.

That future is 2016 at Hazeltine National and, of course, play to begin each day at times much more convenient for us Americans. But the biggest story for the next Ryder Cup is the discussion surrounding who will be tabbed as the next U.S. captain.

Given the fact that the U.S. is winless in the last three Ryder Cups — and has won only twice since 1999 — there is bound to be a cry for change. In fact, that crying has already begun.

While the debate will surely last, here’s a look at some likely — and not so likely — candidates we’d like to see part of the discussion:

Paul Azinger: He’s the last guy to guide the U.S. to a Ryder Cup win (Valhalla, 2008) and did so with some wildly different principles. He worked on team-building more than player performance, introducing techniques from the business world, and it clearly worked. It worked so much so that Phil Mickelson, who has played in the last 10 Ryder Cups while playing on the winning side only twice, brought up the strategy rather bluntly in his press conference Sunday at Gleneagles. Azinger put the players into pods, which did everything together. That helped build succinct units that knew how to work as a team when things were going well and not so well. There’s also the fact that the European team fears him, according to Padraig Harrington. That has to count for something.

Fred Couples: Calm, cool and collected, Couples has guided the U.S. to three consecutive wins at the Presidents Cup. While he has yet to captain a Ryder Cup team, Couples was a vice-captain in 2012 at Medinah and may be the clear choice for the U.S. as it likely wants to go in a different direction.

Steve Stricker: It’s all about putting at the Ryder Cup and this guy’s among the best. He’s proven to be able to engage with the biggest of stars (Tiger Woods) and is certainly young enough and close enough to the game to inspire the likes of Rickie Fowler, Patrick Reed and Jordan Spieth. Stricker, who was one of Watson’s vice captains at Gleneagles, may be in contention to be a player in 2016 given his always consistent play, but why not give him a go?

Phil Mickelson: He’s got plenty of experience as a player and seems to have some thoughts on what works. Lefty is admired by many of the game’s rising players and clearly gets the best out of Keegan Bradley. If the PGA of America wants to get creative: maybe try Mickelson as a player-captain.

Davis Love III: If not for an absolutely ridiculous comeback by the Europeans, wouldn’t you consider DL3’s captaincy in 2012 a success? If there was one negative on his report card, it would be allowing his players to get complacent before Sunday’s singles matches. Given what’s transpired in the last three days, it’s clear that complacency won’t be an issue for a long time for these American players.

Jim Furyk: Following the Mickelson route, how about Furyk? He is clearly fed up with how the U.S. has fared in the nine Ryder Cup events he’s played in. He’ll be 46 in 2016 and clearly has an elder-statesman relationship with the up-and-coming U.S. stars.

Stewart Cink: Believe it or not, Cink played in five — five! — Ryder Cups. While he may not be on the American golf fan’s conscience as much as some of these other candidates, Cink is well-respected and earned his stripes at various levels of the game before becoming a regular on PGA Tour leaderboards. He was also very critical of the U.S. team’s performance during stints on British television this past week.

Tiger Woods: OK, this is a bit of a stretch, but can you imagine a guy more suited to get a team fired up than Tiger? Fist pumps are the name of the game at the Ryder Cup and Woods invented them. On a more serious note, though, Woods said he wants to captain one day but only when he’s done playing. We’re not so sure that he’ll be out of Ryder Cup shape in two years but definitely would like him to be in this discussion.

Brad Faxon: Everything we know about Faxon would potentially make him a great guy to consider for the next U.S. captaincy. He’s calm and cool like Couples, he’s one of the greatest putters the game has ever seen and he’s an extremely likable guy. He also played on two Ryder Cup teams.