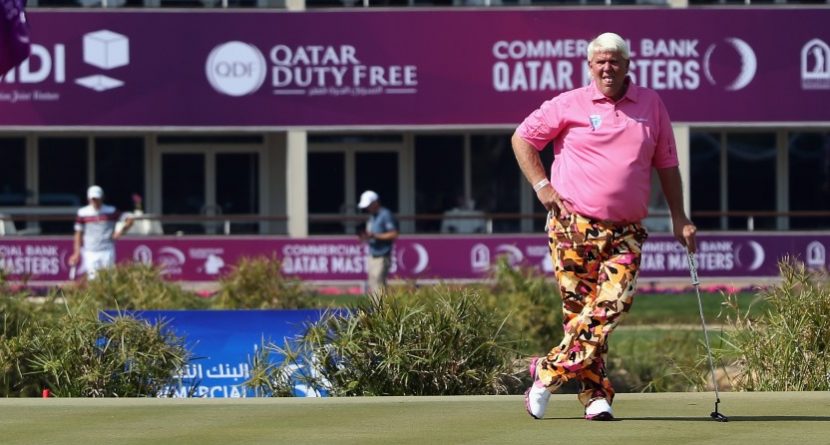 You probably remember the Norwegian men’s curling squad from the 2010 Olympics. The team members made noise with their loud pants – created, of course, by LoudMouth – but also by sweeping themselves all the way to the gold-medal match, where they fell to Canada on its home ice.

The 2014 Olympics begin in two weeks, and the Norwegians announced themselves this week as the early front-runners for best-dressed honors once again. From the looks of this photo, they could very well top themselves in Sochi:

Norway’s curling team has AMAZING uniforms for the Winter Olympics. (via @AP_Images) pic.twitter.com/ZWqLk9PmLh

Those coats! If only they would wear them while playing. Better yet, if only John Daly wore a sport coat while playing!

Arguably LoudMouth’s most famous representative, Daly has been spotted around the Qatar Masters this week looking as dapper as ever. He sported SpongeBob SquarePants pants on Tuesday for the pro-am, then followed up on Wednesday with a pair called “Augusta Magic-A.” The LoudMouth website indicates that it also has an “Augusta Magic Sport Coat” but alas, no picture yet. We can only imagine the awesomeness, and how splendid it would look on Daly. He wouldn’t even have to wear it while playing; just walk up to the first tee in one then shed it like a boxer does his pre-fight robe.

On Thursday, Daly stepped into a pair of pants we can’t even begin to describe, nor can we find them on the LoudMouth website: Just imagine a matching sport coat of that pattern. This should be written into Daly’s contract.