Who Ya Got? Bubba, Keegan & More Make Their Super Bowl Picks 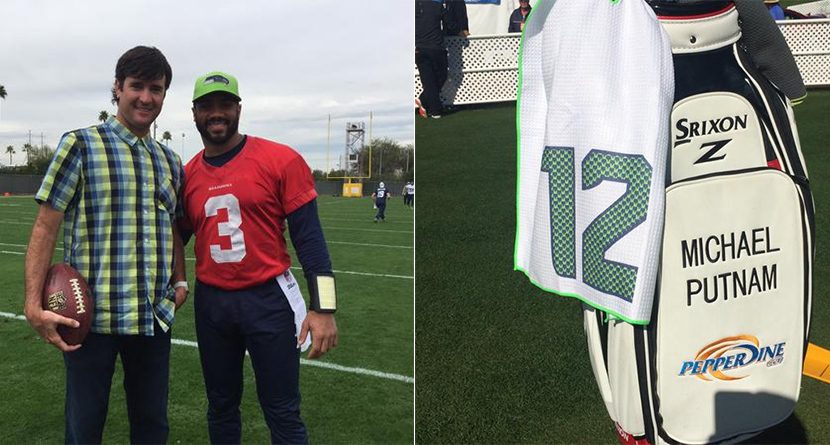 The Waste Management Phoenix Open isn’t the only big sporting event taking place this week in Arizona. You might’ve heard that the Super Bowl is also in town, kicking off Sunday just down the road in Glendale at University of Phoenix Stadium.

Super Bowl XLIX will pit the New England Patriots against the defending champions of the NFL, the Seattle Seahawks.

With final round action of the Waste Management coming to an end just hours before kick off, many of golf’s biggest stars will be watching — and some have already made their rooting interests known on social media.

Dropped by the @Seahawks practice and ran into this guy @DangeRussWilson! #ImTaller pic.twitter.com/qq9Decy2RC

… and Michael Putnam got his “12th Man” towel just in time for the big game:

Putnam shared the “12th man” with fellow Seahawks fan Ryan Moore, who also added the towel to his bag this week:

While those guys are in Seattle’s corner, one guy we know will be cheering on the Patriots will be New England native and rabid Boston sports fan, Keegan Bradley. He’s so confident, he’s already looking ahead to the following Tuesday:

I just hope the weather is good in Boston for the parade.

Andres Gonzalez isn’t so sure Bradley’s Patriots are going to be victorious this week, and has suggested that Bradley take the Seahawks instead  — going as far as to Photoshop Bradley into a Richard Sherman jersey:

Surely, Fred Couples will be rooting for the Seahawks — hopefully he actually makes it to this year’s game.