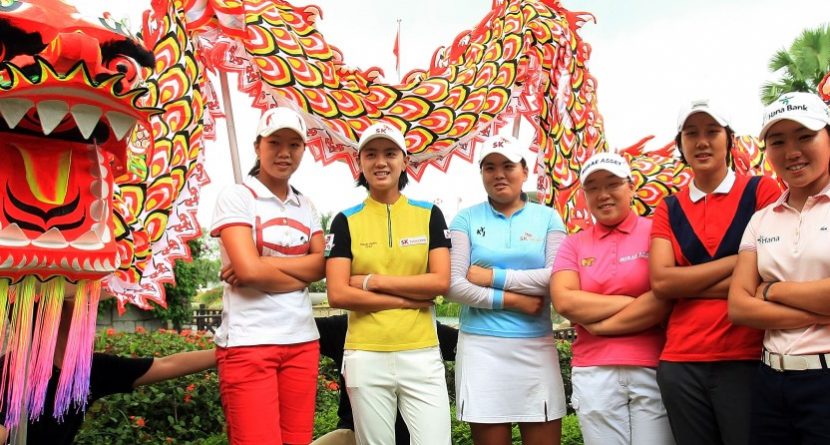 She effectively set off the Se Ri Pak Boom.

Fifteen years later, Pak is still competing but not quite at the level to which she soared in ’98, when she also won the LPGA Championship. She’s currently ranked No. 39 in the world. Ahead of her are 13 women from her homeland.

As Pak cried tears of joy upon accepting the U.S. Women’s Open trophy, shrieks of joy went up all over South Korea. Some of the loudest came from an apartment living room outside of Seoul, where a 9-year-old Inbee Park tried to comprehend the commotion being made by her parents. She didn’t know much about this game of golf, but two days later she began to learn as she swung a club for the first time.

It would be nearly five more years before Park would win another major, but in 2013, she’s already 3-for-3. If she captures the Women’s British Open crown this weekend, she’d become the first golfer – male or female – to win four professional majors in one calendar year.

And it’s not like they’re just breaking out this year. A South Korean has finished three of the last four seasons atop the LPGA Tour money list. Eight LPGA Rookies of the Year since 1998 have been South Korean, led by Pak, who was the first. South Korea has won five of the past six U.S. Women’s Opens. In all, South Korean women have captured 119 victories on the LPGA Tour.

How did this come to be? How has one country slowly taken over as the women’s golf power? Is it all due to Se Ri Pak?

Clearly, she played a large role in South Korean girls picking up the game. But there are other factors at play. Here are three, followed by Pak’s influence:

1) South Korean families can go “all in” with their daughters

It is assumed that elite golfers must hail from wealthy families because the sport is such an expensive endeavor. While it’s true that golf is not cheap, many top South Korean female golfers are from middle-class roots.

“The important thing is they are all in,” said a Korean golf publication editor, who wished to remain anonymous, in an email. “On the contrary, golfers from wealthy families do not go all in as they have other things/jobs to lean on after. However, for the middle-class golfers, because of all the investment into the sport, they go all in. This is all they (have).”

It’s especially true for families raising daughters. Korean men must serve a mandatory two years in the army, which essentially puts their lives and career paths on hold. Women don’t have this requirement, allowing the family to go “all in” on their golf career.

“Roughly, to raise your kids to play golf competitively would cost you USD 500K to 1 mil. Average households cannot afford to pay for this, but once they have started, they don’t want to hold back as it would be a shame to throw away all that effort and money,” the editor says.

It’s well known that golf is as much a mental game as it is physical. So South Korean success begs the question: Are they more mentally tough than their competitors?

“On the contrary, I think they are mentally weak and just ‘ball-hitting machines’ without too much on their minds,” the editor says. “This is an advantage, surprisingly.

“Korean golfers are raised in ‘competitive’ environments from a very early age. I see it not as mental toughness but confidence through a tremendous amount of practice. When meeting the players (I know most of them personally), they are not mentally tough at all. They are more ‘patient.’ They are patient despite all the expectations that lies on them by parents, media, etc. I think they are more patient than any other golfers from any other country. Golfers who are more patient have better scores and these aren’t learnt. This virtue is instilled in them as they grow in the world of golf.”

In 2010, a study by Kim Kibum, Lim Seungyup and Kim Minsuk was published in the Journal of Sport and Leisure Studies under the title, “A Socio-cultural Analysis of the Influx and Success of Korean Golfers on the LPGA Tour.” The group interviewed 11 South Korean players on the LPGA Tour in 2007.

One of the findings was that the Korean women said they were often the first to arrive at driving ranges and last to leave. The players said this idea of practice came from Koreans’ unique strong mentality, and self-sacrificing assistance from their parents.

The aforementioned study also cited that the South Korean players discussed having dreams of playing on the LPGA Tour since they were young, and a longing for Se Ri Pak’s success.

Soon after Pak took the golf world by storm in 1998, more South Korean junior golfers than ever before took up the sport at the recommendation of their parents. This led to the creation of numerous golf academies throughout the country, and they are run by PGA Class A professionals. Those juniors are now old enough to be pros.

Yet, despite how good South Korean women have become, not one has ever earned LPGA Player of the Year honors. Se Ri Pak never earned the accolade, and neither did Grace Park, the first to come out of the Se Ri Pak Boom who won her first major at the 2004 Kraft Nabisco Championship.

But if Inbee Park doesn’t already have that award locked up for 2013, she would with a victory this week at the Women’s British Open.

Related Links: 5 Things You Need to know About Inbee Park