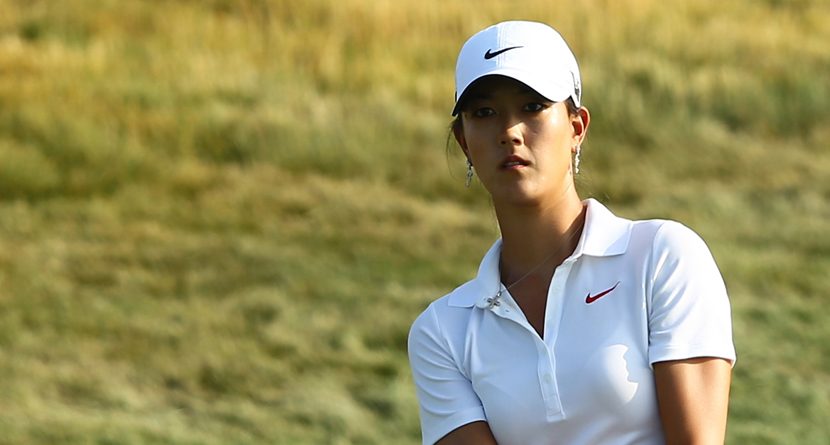 Related Link: 9 Most Powerful Golfers | Is Inbee Park the Best Golfer in the World?

What’s going on with Michelle Wie?

She used to be the most talked-about female golfer on the planet. Now she’s shooting opening-round 80s at the U.S. Women’s Open.

Her round at Sebonack Golf Club on Thursday started horribly, as she carded a quadruple bogey 8 on the par-4 10th. She strung together a trio of pars after that, but then went bogey-double bogey-bogey before ending her outward nine with two pars en route to a 45.

Wie, however, miraculously shook off the dismal first nine by shooting an even-par 35 on the back, offsetting three bogeys with three birdies. Her scorecard contains eight pars, three birdies, five bogeys one double bogey and a quadruple bogey.

Are we talking about a professional golfer or a weekend warrior? Because those numbers, aside from the 35, seem awfully familiar.

So we’ll pose the question again. What is going on with Michelle Wie? She’s finished with school, having graduated from Stanford University well over a year ago. She’s missed six cuts this season and unless she pulls out a crazy-low performance on Friday, she’ll miss another one. Her problem on Thursday seemed to be her iron play because she missed 10 greens in regulation. That could have been affected by a few stray tee shots, however, as she missed five fairways. Her driving distance averaged 283 yards and her 30 total putts were pretty good.

Not that we’re calling Wie an amateur, because if she shot an 80 on the difficult Sebonack layout then we would be approaching three figures.

But there’s some definite cause for concern.

The 23-year-old Wie only has two victories since turning pro in 2005, and neither came in major championships. It looks like that drought will continue this weekend.