Will Jordan Spieth and Annie Verret be Golf’s Next ‘It’ Couple? 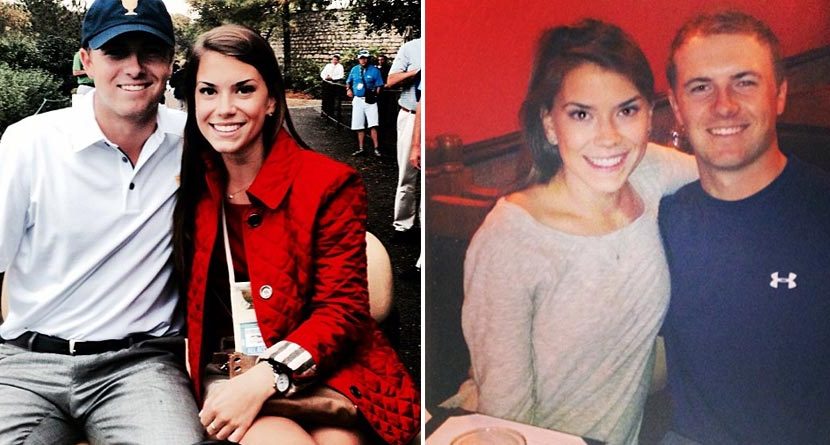 What has become a trend is the so-called “discovering” of these girls on social media. All it takes is a fleeting image from a TV camera to get people buzzing about the pretty face in the crowd and who they’re there for.

In the case of Katherine Webb, it was that glance and one broadcaster’s lusting meltdown over her, while her boyfriend (A.J. McCarron) and his Alabama teammates were routing Notre Dame in the 2013 BCS title game… but I digress.

Golf is no different, and the game’s “it” couples right now are Tiger Woods and Lindsey Vonn, Rory McIlroy and Caroline Wozniacki and Dustin Johnson and Paulina Gretzky. It looks like this trio could become a foursome, however, after Jordan Spieth’s girlfriend, Annie Verret, was spotted during Sunday’s coverage of the Masters and sent Twitter into a flurry.

Being the smart girl that she is, as described by those who have done their research, both Verret’s Twitter and Instagram accounts are, at the moment, private. Because really, who needs the creepers and trolls spamming your account? The closest you’ll get to a spread of her pics are the handful on Spieth’s Instagram account.

The two have reportedly been together since high school and with Spieth’s career taking off at a meteoric pace, it looks like she’ll be by his side for plenty more PGA Tour wins and, perhaps, that green jacket he just missed out on this year.

Oh, to be young and in love and the ninth-best golfer in the world.

Other Hot Links:
– The Fringe: Manny Pacquiao Has A Brand New Bag
– Golf’s Too Hard? Michael Phelps Returning to Swimming
– Bubba Watson Sends Signed Masters Flag to Recovering Teen
– 5 Things You Need to Know About Jordan Spieth
– Did You Know? Bubba Watson Only Has One Green Jacket
– Studs & Duds From the 2014 Masters
– Johnny Manziel Parties with Graeme McDowell at Masters
– Zach Galifianakis Enjoys Bubba Watson’s Awkward Handshake
– The Mini Masters: A Video Unlike Any Other
– Chuck Irons and the Case of the Eisenhower Tree (Video)
– NFL Commissioner Roger Goodell Shows Up at Masters
– Justin Rose Fine-Tunes Short Game with Billiards Table