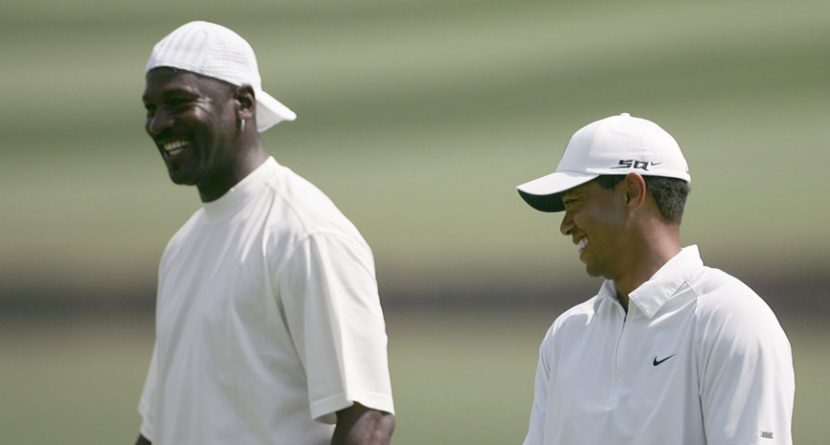 His Airness, Michael Jordan, turned 50 today. You may have heard.

In a little under 13 years, Tiger Woods will also turn 50. Who knows where his golf career will take him — will he catch Jack’s major mark or pass Snead’s PGA Tour win record? Both? Neither? — but Woods becoming a pentagenarian will be a big deal in sport, right?

Even though Jordan lingered competitively far too long, including a stint playing for the Washington Wizards for crying out loud, he retired (for the second time) at age 40. His professional career, including an ill-fated stint as a baseball player, didn’t even span two decades. In a blur, Jordan was gone, leaving his adoring fans with six NBA championships, five MVP awards and 10 scoring titles as memories, as well as a marketing legacy powered by Nike that keeps Jordan’s bank account flush with cash.

When Tiger Woods turns 50 on the penultimate day of 2025, he will have been in the public spotlight for almost 48 of those years, dating back to his appearance as a two-plus-year-old on “The Mike Douglas Show.” Even for the less golf-obsessed among us, Woods truly entered the sporting consciousness in 1997, winning the Masters in record fashion for his first major. By the time Dec. 30, 2025 rolls around, Woods’ name will have been on the tips of many tongues for three decades.

Call it almost 30 or 48 years, or somewhere in between, but that’s a long time. Outside of the likes of “Meet the Press” and the nightly network newscasts, few shows have been continuously broadcast longer on TV.  And it probably won’t be over when he turns 50. (Hey, “The Simpsons,” I only bought the first 10 seasons on DVD. You’re not getting any more out of me.)

A stint on the Champions Tour — which, by then, may well be the Phil Mickelson Thumbs Up Tour — seems about as likely as Woods purchasing a number of Perkins franchises, but he could still be competing. That’s more likely if he is desperate to nail down the one or two majors to get to 18 or 19 majors. Woods said last year he is confident a major breakthrough in his 50s is possible on the right track.

The 14-time major winner submitted Tom Watson as evidence that such an age-defying win is possible. Watson nearly won the Open Championship in 2009 at the age of 59, thanks in part to a bionic hip, but also the local knowledge he had at host Turnberry and his unique ability to play in the wind.

Watson already commanded respect for his incredible career, but his longevity in golf impacted his broader legend. He struggled with putting for years after his last major win in the ’83 Open Championship, impacting how the public saw him. He stayed around on the PGA Tour for too long before hopping to the Champions Tour and (quietly) winning again. His run, albeit one that came up short to Stewart Cink, for those four days in July at Turnberry turned out to be the proper celebration of his career.

Jack Nicklaus enjoyed a similar going-out party at age 58. When the Golden Bear captured his 18th and final major at the ’86 Masters, he was 46. Four years later, he turned 50 in 1990. He went on to play the Champions Tour, taking eight senior majors in sporadic action. However, two years after his last 50-plus circuit win, Nicklaus was in contention on the back nine on Sunday at the ’98 Masters. For a brief time, it seemed there might be one more big one in the holster. Though he came up short, Nicklaus remarkably finished T-6 and four strokes behind Mark O’Meara.

It’s not hard to fathom Woods doing something similar, maybe even getting the job done. Based on Watson’s and Nicklaus’ timing, we’re looking at a 20-year wait until the 2033 season for that to happen.

Golfers, even those on our Mount Olympus, rarely get the victory lap they truly deserve. The sport’s Hall of Fame inducts players when they are as young as 40. Woods, therefore, will be inducted in 2016 — as he prepares to compete in The Players Championship that week.

Even if the World Golf Hall of Fame changed its criteria to be more age appropriate for the sport, golf has a way of keeping its big names in the fold. (No, I’m not going to make a “The Godfather: Part III” joke.) Jack is still in plain view in many ways, including striking the ceremonial first tee shot at the Masters. Gary Player and Arnold Palmer join him. Tom Watson will actually compete at Augusta National — and for good reason, he nearly had the first-round lead there in 2010.

None of them, however, got the message Bobby Jones sent when he retired from the game at the ripe old age of 28: go out on top. Coincidentally, only two golfers ever enjoyed a ticker-tape parade in New York: Jones twice and Ben Hogan, whose greatness was understood and celebrated, in part, because he survived and thrived following an auto wreck that would have killed most men.

While Woods has said he will walk away when he feels unable to compete at the level he wants, the odds of that happening are slim. The call of history and the chase of one last big win will keep him going. So when will Woods get his due (the infidelity somewhat aside)?

Maybe, like Jordan, it will be subtle — in the form of a youngster buying a Nike TW hat or pair or shoes, not completely aware of the competitive greatness that eye-catching logo represents.