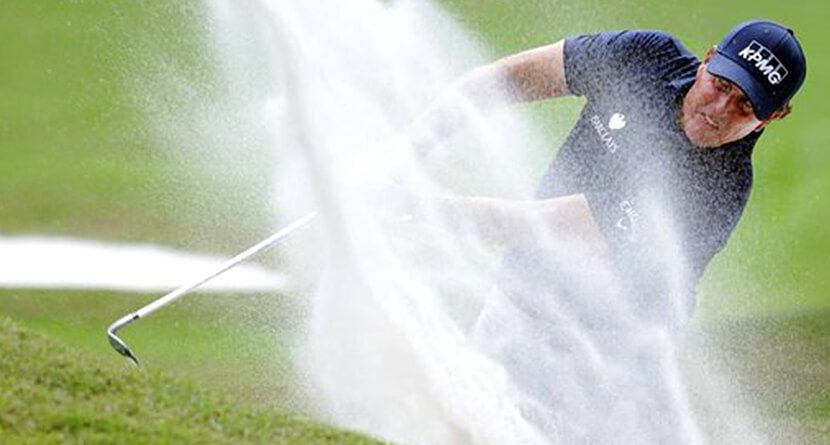 Phil Mickelson has walked on a tight rope for the majority of his nearly three-decade-long PGA Tour career, earning him hordes of fans, trophies and dollars. Yet, a piece published Wednesday night on the Wall Street Journal website openly wonders if Phil’s gambling off the course could permanently tarnish a reputation built largely on it.

Twice in the past year, separate criminal charges have been filed against people with whom he was involved in gambling transactions, including insider-trading charges announced last Thursday.

Mr. Mickelson wasn’t charged with wrongdoing in either case, but he has agreed to pay a $1 million settlement to the Securities and Exchange Commission in one. And the persistent reports about his gambling have swirled around one of golf’s most popular stars, who earns millions each year from endorsements and other off-the-course income that depends on his image.

Mr. Mickelson isn’t the first professional athlete to have been publicly known to rack up wagering losses, including fellow golfer John Daly who wrote in a book that he lost $50 million to $60 million on gambling.

Mr. Mickelson’s betting also was sizable. He was a well-known figure in Las Vegas in the late 1990s and early 2000s among casino employees and was known to bet heavily on baccarat and football games, a person familiar with his gambling there said.

Between October 2000 and June 2003, Mr. Mickelson lost nearly $2.5 million gambling in Las Vegas casinos, according to a gambling credit report used by casinos to evaluate their customers and being reported for the first time by The Wall Street Journal. He also gambled heavily there between 1995 and 1997, the records show.

In detailing Mickelson’s dealings in the more recent past, Michael Rothfeld and Alexandra Berzon pull no punches saying, “it is clear that Mr. Mickelson hadn’t stopped making big bets,” going on to cite Mickelson’s involvement in a money laundering case stemming from a $2.75 million gambling debt in 2010.

In a well-written explanation piece for Golf Digest, Shane Ryan detailed how Mickelson skirted a more serious legal snafu and further potential discipline. Thanks to some recently-passed legislation, Mickelson’s name will remain relatively clean once the mud of the insider trading case washes off.

So let’s drop the pretense. As a collective entity, golf journalists should have the guts to say what Joe Nocera of the Times said: Looking at the facts, Mickelson clearly benefited from the recent change in insider-trading laws. For a golfer who seems to believe that he’s the smartest guy in the room wherever he goes, he made a really dumb move, and I’m going to take a wild guess that he didn’t know U.S. v. Newman was waiting as a safety net. Furthermore, for a guy who Golf Digest estimates makes more than $50 million a year in winnings and endorsements, why would he risk his neck for a profit that falls short of what he’d make for filming a single commercial? What kind of decisions has he been making?

These are the questions we should be asking. So when the “vindicated Phil” narrative starts gathering momentum, as it inevitably will, please don’t believe it. Lefty got lucky, and that’s about it.

It’s unlikely this dodged bullet will do much to alter Mickelson’s legacy inside the game or out. He and his team are making all the right moves publicly in the aftermath and will surely sweep it under the rug as a busy summer of golf approaches.

Phil gambled and this time, he won.