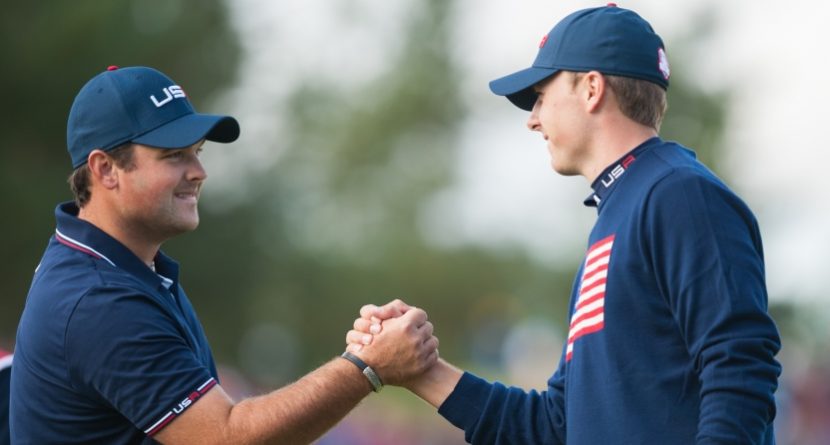 Tom Watson’s last throw of the dice was to put his young guns out first. It made perfect sense. His team trailed 10-6 and he needed to make something happen — and he needed it to happen quickly.

In the end, it didn’t quite work out.

Unencumbered by the weight of defeat, full of optimism and expectation, why wouldn’t you ask Jordan Spieth, Patrick Reed and Rickie Fowler to get your team going? Nothing but a great start would do for the USA.

And they got it from Jordan Spieth, the youngest player on either side. The 21-year-old took on Graeme McDowell and he was quickly 3-up. It was neck and neck between Stenson and Reed, but McIlroy was having one of those days and Fowler was headed for a hammering.

When they reached the 13th, McIlroy was 4-up with six to play and he put the first point on the board for Europe when he beat Fowler 5 and 3. He was eight under par.

“It has been incredible to play in front of these fans,” McIlroy said. “To be honest, I was more up for this day than I was even for the last day of The Open.”

When McDowell battled back to win the 10th and 11th holes and reduce the deficit to Spieth to just one hole, you sensed that the tide might be turning in Europe’s favor. Then, McDowell made it all square.

Incredibly, by the time they reached the 16th, McDowell had turned things around completely and was 2-up. He secured the match with a brilliant par on the 17th. It meant Europe led 12-6 and needed just two more points to retain the cup.

“I got off to a slow start,” McDowell said with tears in his eyes. “He missed a putt to go 4-up and that was the turning point for me. This is what we play for and practice for. Sometimes we have to remind ourselves of that.”

Spieth made mistakes on the back nine and will know that he should have done better, but hopefully he will learn from this experience.

That left Reed. He wears his heart on his sleeve and is the sort of golfer whose demeanour always reflects the quality of the shot he just hit. He took six at the second and the ninth, but a couple of birdies ensured that he and Stenson reached the turn all square. And Reed nosed ahead with a birdie at the 11th. He and Spieth look like players who were born to play Ryder Cup golf and could form a formidable partnership for many years to come. America has been looking for a Ballesteros and Olazabal for years — maybe they finally found it.

Reed was 1-up playing the 15th, but a wild drive was never seen again. He was all square with Stenson and seething. Despite the mistakes, Reed had seven birdies in 17 holes and went to the 18th with Stenson all square. With his eighth birdie of the match, Reed was victorious.

At last, a point on the board for America, and it won’t be the last that Patrick Reed scores for them.