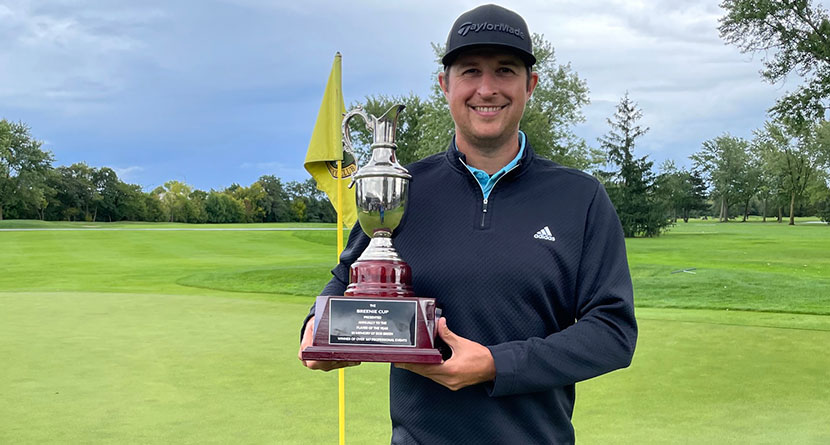 The Head Teaching Professional at the VC Golf Academy based out of the Galt Country Club in Cambridge, Ontario, Victor was awarded the Breenie Cup, recognizing him as an outstanding player among the ranks of the PGA of Ontario membership based upon a season-long points competition.

“It’s pretty special,” Ciesielski said. “Our province and our nation has so many incredible players that it means a lot. To be the most consistent and to be able to have the trophy at the end of the year is what we’re all gunning for.

“My goal at the beginning of every year is to get to the top of the Order of Merit, and I was able to do that this year, so pretty fortunate and pretty happy with my results.”

Ciesielski started using the SwingU App and its proprietary Versus strokes gained and stat tracking system in June 2022. Since then, Victor won the Match Play Championship at Beacon Hall Golf Club in September and posted four other top-5 finishes at PGA of Ontario events.

ICYMI- Congratulations to Victor Ciesielski for winning the @pgaofontario Match Play Championship under some challenging weather conditions @BeaconHallGolf Vic jumped out to an early lead over Branson Ferrier and held in to win 2&1. 🏆🏆 #PGAProud pic.twitter.com/bqUwMv4uu1

“I want to get my strokes gained to a certain number, and SwingU definitely helps make things easier and so much clearer,” Ciesielski said. “The platform does such a great job of showing you exactly what your stats are, where you are day-to-day. You can decipher from tournament rounds to regular rounds.

“Also, day-to-day, week-to-week and month-to-month, (SwingU) gives you so much content and videos that you’re able to develop ideas and find drills. The app definitely shows you holes where there are areas of opportunity and and also develop your strengths. It’s a pretty cool platform.”

Heading into the offseason, Ciesielski has a plan in place that he hopes will allow him to peak when he plays in the events he holds in the highest regard next summer.