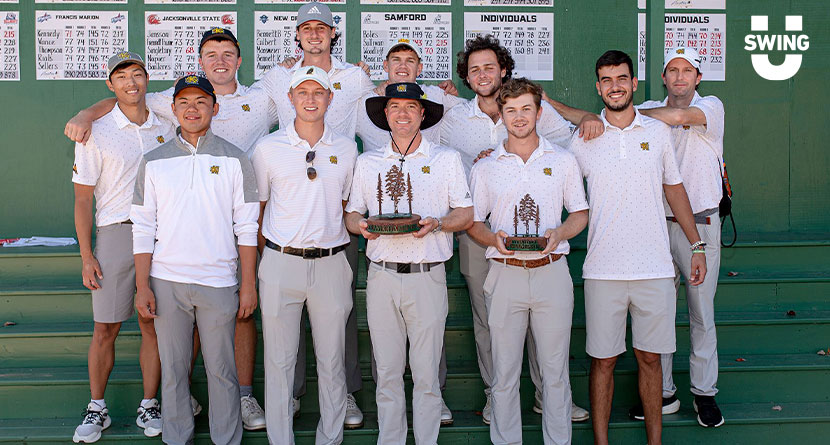 SwingU, the sports technology and media company, would like to congratulate the Kennesaw State men’s golf team, a SwingU Collegiate Pilot Program, on its team and individual victories at the Pinetree Intercollegiate (hosted at Pinetree CC in Kennesaw, GA).

The Owls carded a 5-under par round of 283 for a 3-under par total of 861 to win by eight shots over second-place Arkansas State. KSU was the only team to finish under par after 54 holes.

KSU’s Brock Healy captured the individual title at 6-under par 210 for the event, which included a 175-yard hole-out eagle on the final hole to seal the victory.

“Magical day on the golf course today for our team,” head coach Bryant Odom said. “We knew it would be a challenging day in contention against Arkansas State. The front nine was playing tough and we were holding our own but the guys stepped on the gas and made a 17-shot improvement on the back nine and scored the lowest team round of the day to seal the win.”

Kennesaw State started using the SwingU App and its proprietary Versus strokes gained and stat tracking system in August 2021.

Since starting with SwingU Versus, the Owls have seen steady improvement throughout the fall, finishing ninth at the Golfweek Fall Challenge and fourth at the J.T. Poston Invitational in September before winning at Pinetree Country Club this week.

“SwingU Versus has helped our golfers focus better on what they need to work on as opposed to what they may have incorrectly perceived. For me as a coach, I really enjoy the ease of use in quickly referencing my players’ stats from their rounds and events and leveraging that within their personal practice plans,” added Coach Bryant Odom.

Kennesaw State will wrap up their fall season with two events over the next two weeks. The Owls will travel to Chattanooga, Tennessee to compete in the Battle at Black Creek hosted by The University of Tennessee at Chattanooga on Oct. 25-26 and then compete at the Steelwood Collegiate Invitational in Loxley, Alabama hosted by the University of South Alabama, Oct. 30-31.