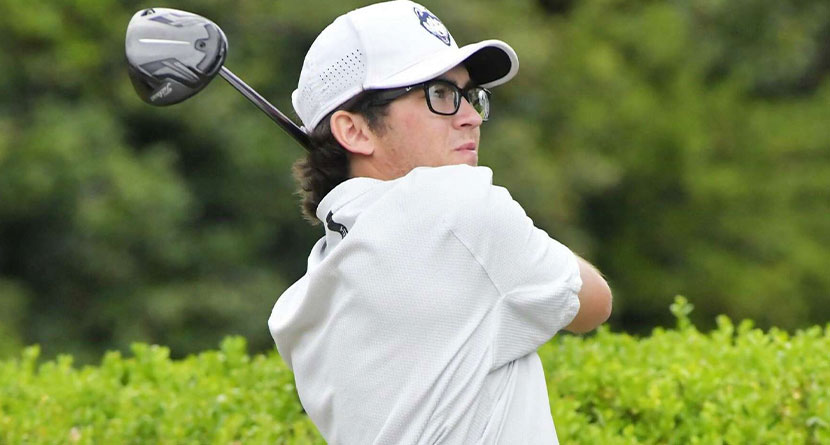 SwingU, the sports technology and media company, would like to congratulate SwingU Versus Collegiate Ambassador Caleb Manuel for qualifying for this week’s United States Open at The Country Club in Brookline, Mass.

Manuel, a junior at the University of Connecticut, started using the SwingU App and its proprietary Versus strokes gained and stat tracking system in August 2021. A few months later, Manuel won for the first time at the UConn Invitational. In May, he earned co-medalist honors at the Big East Men’s Golf Championship and earned a berth in the NCAA Men’s Golf Regionals.

On June 6, Manuel co-medaled at the U.S. Open Final Qualifying site at Purchase, N.Y. The 20-year-old shot rounds of 69-68 at Old Oaks Country Club and Century Country Club to punch his ticket to the U.S. Open.

“It’s a dream as a kid to be able to play (in the U.S. Open),” Manuel said. “To get to this stage and be able play well and make it through, it means everything.”

Manuel needed to make a six-footer for par on the 18th hole at Century C.C. to post 3-under par to avoid a playoff and guarantee himself a spot into the field.

“I didn’t treat the putt any different. I’ve been on the putting green at (my home course) saying, ‘this is a putt to win the U.S. Open,’” Manuel said. “Before I hit the putt, I told myself that it was to qualify for the U.S. Open, so I was well prepared for it.”

Manuel led the UConn men’s golf team in scoring in each of the past two years and is the Huskies’ top career scorer. He’ll now put his game on display at one of the sternest tests in the game.

Manuel is scheduled to tee off in the first round of the U.S. Open alongside Keith Greene and Ben Silverman at 8:57 a.m. ET.