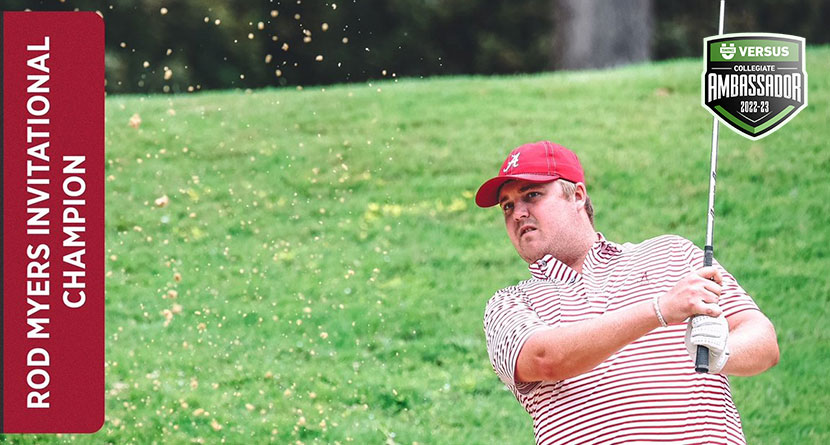 SwingU, the sports technology and media company, would like to congratulate SwingU Versus Collegiate Ambassador Canon Claycomb of the University of Alabama for winning the Rod Myers Invitational Individual title.

Claycomb, a senior, started using the SwingU App and its proprietary Versus strokes gained and stat tracking system in September 2021. A few months later in February 2022, he won his first collegiate title by eight shots at the Watersound Invitational, and last week, he kicked off his senior season in style with a five-shot victory at Duke University Golf Club thanks to rounds of 69-71-65, 11-under par 205.

“Winning is always awesome. I am especially proud of how I competed on the back nine (in the third round),” said Claycomb. “I was frustrated the first two-and-a-half rounds because I was hitting it great but felt like I wasn’t making any putts.

“I kept telling myself they would go in eventually and they did. I’ve worked really hard the past year and I’m starting to see the results, but am excited to continue working harder so that I can have this feeling more and more.”

Claycomb’s stats backed up the senior’s words. The Bowling Green, Ky. native picked up 2.6 strokes gained vs. par off the tee and an incredible +13.0 strokes gained approaching the green. While his putting let him down in the first two rounds, Claycomb picked up +2.5 strokes vs. par on the greens en route to a third-round 7-under par 65 in which he made six birdies on the back nine.

Led by Claycomb, Alabama won the team event for the program’s first victory in two years. Next up for Claycomb and the Crimson Tide is the SEC Match Play Hosted by Jerry Pate at Shoal Creek Club in Birmingham, Ala.