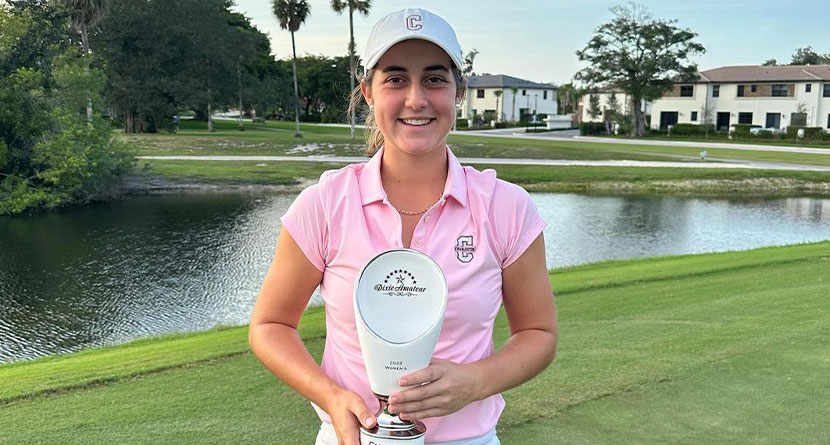 SwingU, the sports technology and media company, would like to congratulate SwingU Versus Ambassador Emma Schimpf for winning the 2022 Dixie Women’s Amateur.

Schimpf, a sophomore at the College of Charleston, started using the SwingU App and its proprietary Versus strokes gained and stat tracking system in November 2022. Schimpf shot rounds of 67-70-70-68 at Palm Aire Country Club in Pompano Beach, Fla. to reach a playoff, which she won on the third hole of sudden death.

“I really enjoyed playing in this event and it was a real test of my game with my ball striking not being at 100 percent,” Schimpf told AmateurGolf.com. “My short game stayed strong and putting definitely held me in there, I stayed patient the whole tournament along with keeping a good attitude. It’s a great way to end the 2022 golf season.”

Schimpf’s strokes gained stats backed up her words. Over four rounds of competition, she lost strokes to par off the tee (-2.7 SG), but gained in the other four facets (approach, chip/pitch, sand & putting), headlined by her short game, which accounted for +3.9 strokes vs. par chipping & pitching, sand and putting.

The victory rounded out a fantastic 2022 for Schimpf. She’s now won three times since October, including a first-place finish at the Evie Odom Invitational in Virginia Beach and co-medalist honors at the Edisto Island Invitational.

Schimpf is ranked 22nd by Golfstat in Division I collegiate women’s golf and 37th nationally in the Golfweek/Sagarin individual rankings.

Since the start of 2021, more than 100 active professional and top-tier collegiate golfers have been using the SwingU App and Versus platform to track their strokes gained and game-improvement data.