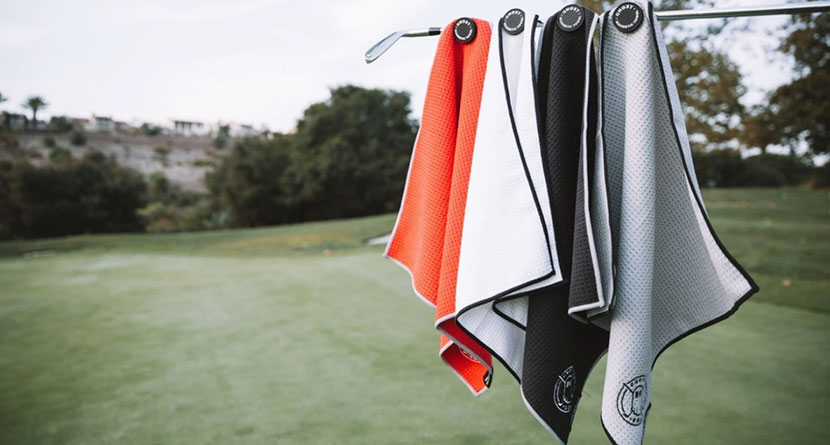 Do you have a favorite golf towel?

Of course you don’t, because soon as you get attached to one, you’ve probably left it behind at a green or it fell off your bag, gone forever. Golf is hard enough without having to mix in a mid-round scavenger hunt.

That’s one of the problems Ghost Golf set out to eliminate with their line of magnetic golf towels, while also making keeping your clubs clean endlessly more convenient.

Incorporating a hidden magnet behind a silicone logo, Ghost Golf combines the convenience of a magnet with the function of a waffle-weave towel. It’s one of those products you look at and say, “why didn’t I think of that?” Probably because you had already resolved yourself to a fate of endlessly purchasing and replacing your golf towel until the end of time.

Before you get into the bells and whistles (and magnets), the most important part of any golf towel is the material from which it’s made, and without a shadow of a doubt, the rise of the waffle-weave pattern in the golf towel space is the biggest indicator of a solid accessory.

Even without the magnet on the Ghost Golf towel, the first piece of the puzzle was nailed by simply getting the right fabric to clean golf clubs and golf balls. There are a million of those waffle-weave patterns out there — many of which have been lost or discarded and found and lost again — but what sets Ghost Golf’s towels apart are, of course, the magnets.

It’s so ingenious in its simplicity that it makes something you take for granted that much easier. And when you’re playing golf and trying to shoot the best score possible, the fewer the distractions the better.

The best part about magnets is that they stick to everything. Obvious, right? But instead of looking on the floor of the cart, in the cubby or the back basket, having your towel easily accessible and hanging from your cart is so convenient. Adding to that convenience is the ability to simply grab the towel and go up to the green.

There are plenty of towels that we can clip onto our bag, but no one wants the hassle of clipping and unclipping it every hole. Typically, something’s got to give: either it’s an off-the-bag towel for the day or it’s an on-the-bag towel. Ghost Golf covers both bases.

While the magnet is a nice touch hanging from the cart frame, we know a towel is only worth what it does around the green, and this is where Ghost Golf shines.

As amateur golfers, we know that we’re missing a handful of greens in regulation on a good day, so anything that makes our lives a little easier is always appreciated. Grabbing a few wedges, a putter and a towel and walking to 5 or 6 greens to chip before we putt is a recipe for a lost towel, but with the magnet, you can swoop up your towel with a wave of your wedge.

The same goes for on the green as you’re heading back to the cart. Say goodbye to the walk of shame back up to the green as the group behind hits into you while you retrieve your left-behind towel.

Touting yourself as “The Best Towel in Golf” and “The No. 1 Towel in Golf” requires a fair bit of confidence on the manufacturing side of things, but Ghost Golf simply lives up to the monikers, exceeding even a skeptic’s expectations.

Simply slapping a magnet on anything would have improved it, but the product Ghost Golf is selling here is a quality golf towel with an added piece that isn’t available anywhere else.

Starting at $40 for the 18″ x 18″ Greenside Towel and $45 for the 18″ x 40″ Caddie Towel, Ghost Golf offers a variety of mix-and-match options and colors to match any golfer’s preferred scheme.

SwingU readers can get 20% off their order at GhostGolf.com by using promo code SWINGU20.