We have found 1132 results matching &quotgps"

Christmas comes in December, and many businesses put on a “Christmas in July” event. But Tuesday is like Christmas in September for iPhone fans. That’s because Apple introduced two new versions of the iPhone 5: a …

After Phil Mickelson’s 2013 British Open win, he did something that few Tour players do in their victory speech. He thanked the engineers at Callaway Golf for their support. And he followed that up with an …

If you’ve been around golf for a long time you’ll remember the old adjustable iron, which allowed the loft to go from wedge to 2-iron by loosening a screw and notching a gear-like mechanism to the …

Be honest iPhone devotees: Can you imagine your life without the Apple App Store? Hard to believe, yes, but you actually got along fine without it just five short years ago. That’s right – in June …

Be honest iPhone devotees: Can you imagine your life without the Apple App Store? Hard to believe, yes, but you actually got along fine without it just five short years ago. That’s right – in June …

Father’s Day is this weekend. Since your mind is all wrapped up in US Open excitement, you’ve probably completely forgotten about buying something for Dear Old Dad. You’re such a disappointment. Why can’t you be more like your brother? Don’t worry; the Back9Network’s got you covered with nine great gift ideas that you can pick up right now. With any luck your old man will keep you in the will.

Chances are, if you’re a golfer who owns an iPhone or Android device, you’ve probably looked for apps that will help you enjoy the game more. I know I have, often to the extent of breaking the bank on trying new and innovative ways to track how far my golf ball flies into a ravine or lake.

Professional-soccer-player-turned-professional-boxer Curtis Woodhouse does not take kindly to being mocked on Twitter. So much so that he tracked down the guy mocking him. 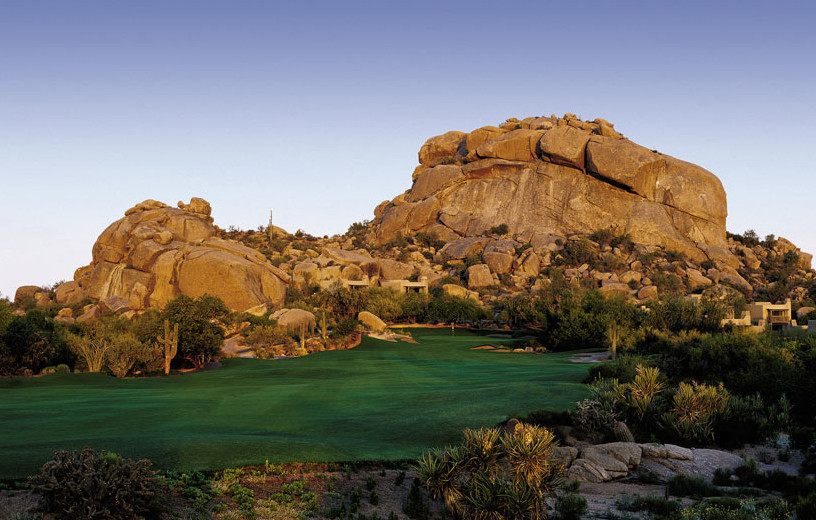 Our directions indicated my wife, Deb, and I had arrived at The Boulders resort. Yet, we both had the simultaneous thought we could have just as easily been Fred and Wilma Flintstone pulling into their neighborhood after a night on the town with the Rubbles. Yes, The Boulders, a luxurious, much-celebrated property 45 minutes north of downtown Scottsdale in the aptly named town of Carefree, is a dead ringer for Bedrock. In fact, some of the 1994 movie, “The Flintstones,” was actually filmed at the sprawling, 1,300-acre resort, whose two magnificent 18-hole golf courses and Southwest-style, adobe flat-roofed guest casitas, villas and haciendas blend into the high Sonoran Desert’s omnipresent 12-million-year-old granite boulder formations.

An Apple Watch?~The Impact on Golf

As Chicago sang, Does anybody really know what time it is? It might be time for an Apple watch. An iWatch. At least that’s the rumor according to multiple reports, including the Wall St. Journal. Reportedly, the company has been in discussions with manufacturing partner Foxconn to create a wearable product that would have some functions of a smartphone. While the features of an iWatch aren’t known, it would seem reasonable to expect that it would pair with an iPhone to do a variety of things, including making and taking calls, GPS functionality and the like.