What Facet Of The Game Should You Spend The Most Time Practicing? 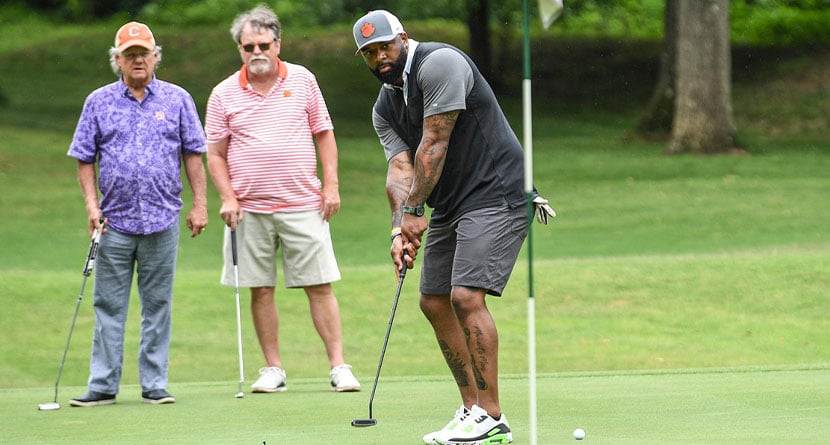 If you guessed short putts, you’re a winner.

The often-overlooked fact is that putting is a critical 40% of the game. This is true of all golfers at every level.

Clearly, not many of us have the physical skill to drive the ball like a Tour player, but almost anyone can putt like a Tour player with the right equipment, technique and practice. There’s been a lot written about equipment and techniques for better putting. What’s surprisingly not talked about as much is an approach for practicing this all-important skill.

For guidance, I studied our database recorded at a 17-slope adjusted differential (this was the 12,000+ rounds we have for golfers that actually played exactly to their 17-handicap). The data shows us that a 17-handicap male golfer’s average round includes:

Short Game (shots within 50 yards of the hole):

50% Make Distance: The distance from which our prototype will make 50% of putts is 5 feet. (By comparison, the PGA Tour player’s 50% make distance is 8 feet.)

2-Putt Range: The distance from which the prototype average will 2 putts is 16 feet. This means that outside of 16 feet, our 17-handicapper will 3-putt with a greater frequency than 1-putt. (The PGA Tour’s 2.0 distance is 34 feet.)

I used our data to project recommended practice distances. As you can see below, 68% of the average golfer’s putting opportunities are from 15 feet and closer and 41% are from 5 feet and in. 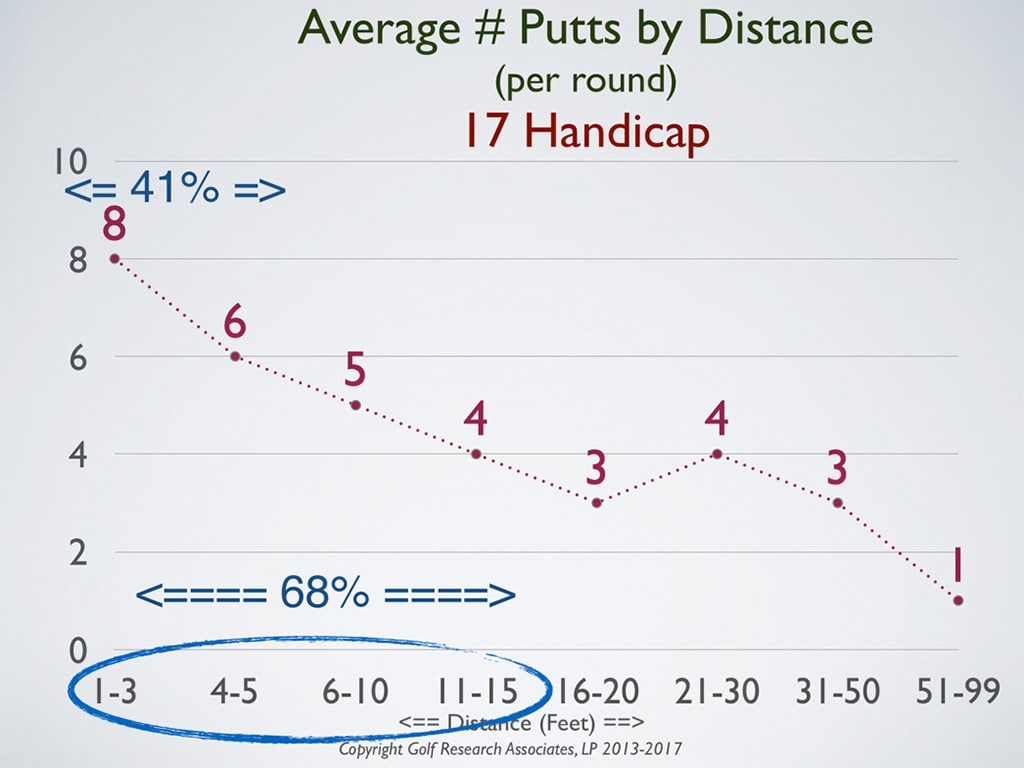 The chart below displays our average 17-handicapper’s 1-putt and 3-putt percentages by distance range. 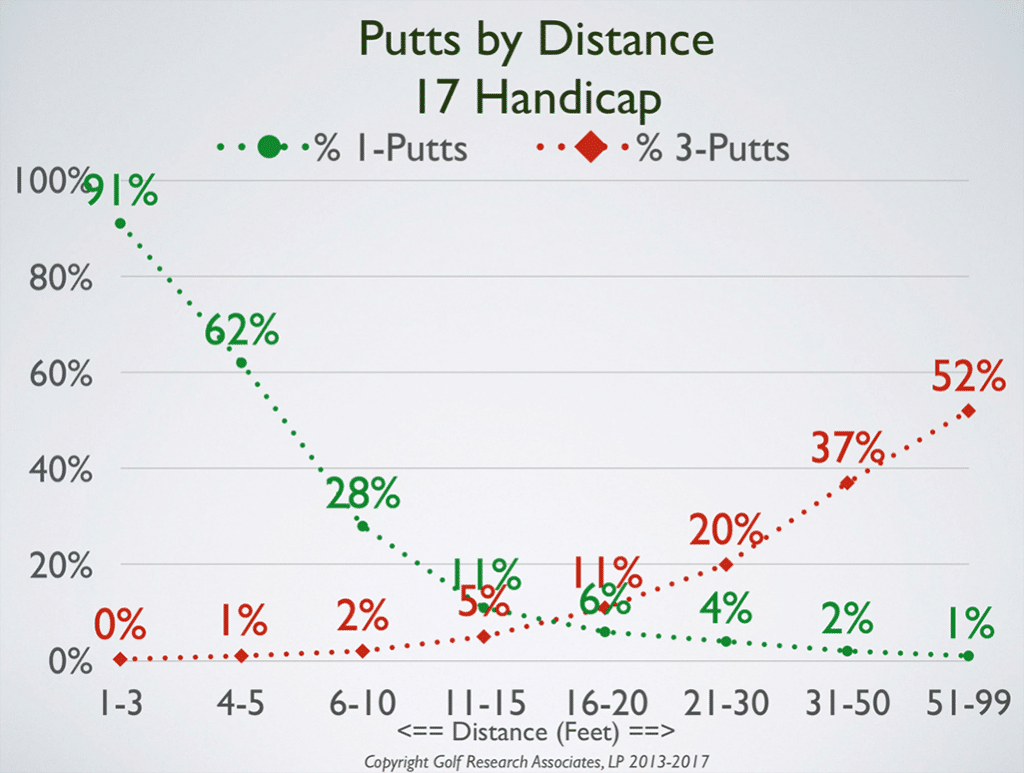 Finally, I charted 1-putt percentages from 3-10 feet for the average 17- and 10-handicap golfer. 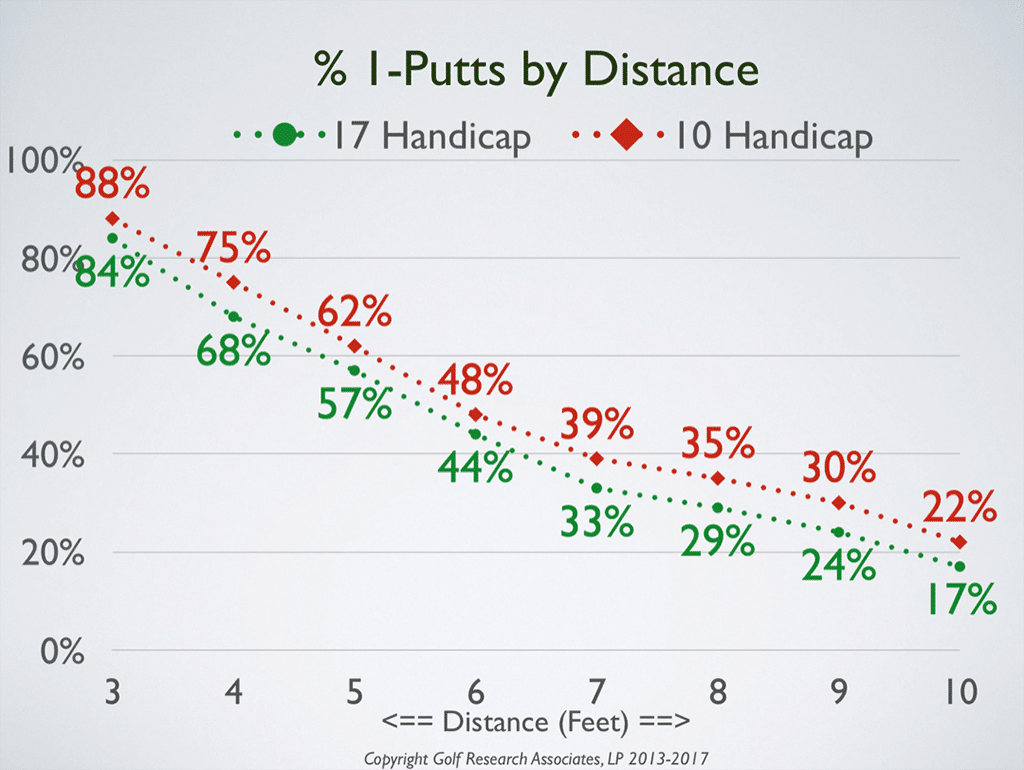 I was taught this practice drill by a young professional over 30 years ago and Phil Mickelson has been seen using it in his practice sessions.

Place 5 tees a given distance from the hole in a star pattern. I recommend starting with 3 feet. A slight slope will provide a slope from each direction as shown below.

Make sure to practice your set-up routine with each putt and make it real. 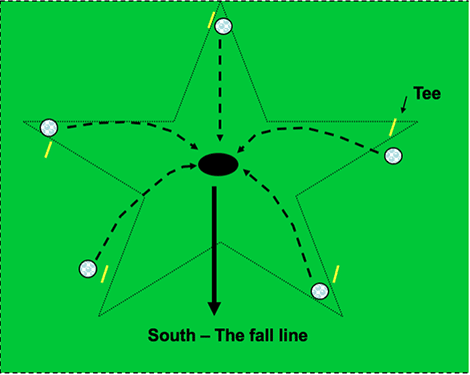 Place a tee 20 feet from a target or hole. Use two or three balls and practice lagging them back and forth until you can consistently get the balls to the target, but no farther than 2 feet past the hole.

Repeat the drill from 30 and 40 feet trying to leave the putts no farther than 3 feet from the target.