Round 1 Recap: From Glory’s Last Shot to Rory’s Latest Shot 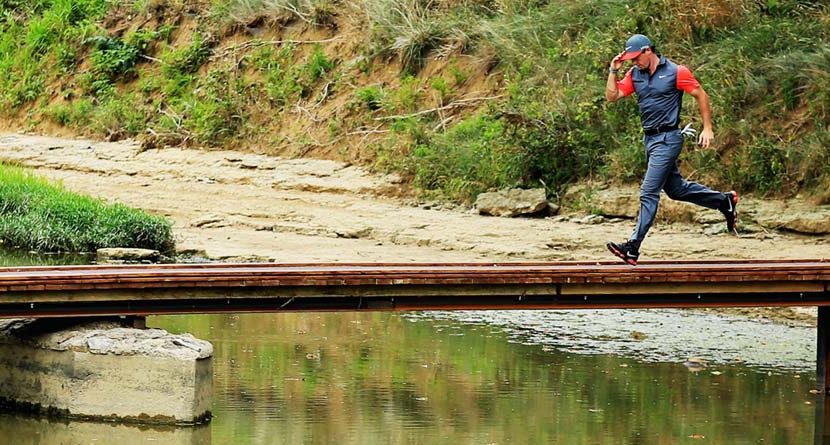 And so it begins. They call it “Glory’s Last Shot,” but with all eyes on a certain Northern Irishman, perhaps it should be “Rory’s Latest Shot.”

As the crowds poured into Valhalla, in Louisville, Ky., they had just one question in mind: Could Rory McIlroy win his third tournament on the trot, and his second major of the season?

He started as the favorite. Tiger Woods began his opening round and you could have got odds of 50/1 against him winning. It turned out that the bookies knew what they were doing – he was not at the top of his game and finished with a 74. But the good news was that there was no sign of his back giving him any trouble.

For many players with Ryder Cup ambitions, this is a big week. Valhalla measures 7,400 yards and should provide a terrific test, but the early starters showed it little respect.

Lee Westwood, who has had a season to forget, finished off last week at the WGC-Bridgestone Invitational with a 63. Was it a fluke? The 65 strokes he took to complete his opening round at Valhalla said otherwise, especially when you find out that he started with a double-bogey. His round featured nine birdies, including five in a row.

Kevin Chappell joined Westwood with a 6-under as well. Chappell, who has been on tour since 2011, is still looking for his first win.

Jim Furyk, who has found all sorts of ways not to win in the past couple of years, is playing sensational golf and was delighted to kick off with a 66.

Ian Poulter is another who needs a big week — a BIG week. He has shown little form in 2014 and captain Paul McGinley wants him on the European Ryder Cup team after his heroics at Medinah two years ago. Something finally clicked for Poulter as the Englishman reeled off five birdies in his 68.

Edoardo Molinari, a former U.S. Amateur champion, had a top-10 finish at the Open Championship, and continued his fine form to join Furyk at 5-under.

American golf fans may remember a rather large and terribly grumpy Scotsman who nearly won the U.S. Open several times and lost the PGA Championship in a playoff. He is 51 years old now, and got into the tournament after winning the Senior PGA Championship. Bigger than ever, Colin Montgomerie shrugged off the heat and humidity and scored a first-round 70.

And what of McIlroy? He missed a six-footer for birdie on the first, parred the second and third after missing both greens, and looked like his heroics were finally catching up with him. Not a bit of it — his first birdie of the day came at the fourth, when he drained a nine-footer. He was off and running. Two more followed and he reached the turn at 3-under and was cruising.

And then came the par-5 10th. Another birdie opportunity. But a horrible hook out of bounds resulted in a double-bogey 7. In the blink of an eye, McIlroy was 1-under and back amongst the pack. It got worse, however, when he three-putted the 11th.

He was playing with Bubba Watson, the two-time Masters champion, and Martin Kaymer, the U.S. Open champion. Watson had upset a lot of people on Tuesday by refusing to take part in a charity long-drive contest. Inexplicably, he pulled out a 3-iron.

Meanwhile back on the course, Watson birdied the first and then drove it deep into the woods at the second — he barely moved his first attempt to escape and then had to accept his medicine and chip out onto the fairway. Watson being Watson, he then hit his fourth shot to six feet and holed an improbable bogey. An eagle followed at the seventh. Only Bubba.

Kaymer continued to struggle to rediscover the form that took him to a U.S. Open victory in June. But his travails were nothing when compared with Jason Dufner, the defending PGA champion. Playing with a neck injury, he was 8-over par when he quit at the 10th. Injury problems are beginning to mount for U.S. Ryder Cup captain Tom Watson, with Dustin Johnson taking an indefinite break from golf, and Woods struggling with injury and form, and Matt Kuchar pulling out before the start with a back injury.

Watson must be wondering if he’ll be able to find 12 fit players for Gleneagles in September.

The best of the later starters was Ryan Palmer, who got to 7-under before dropping a shot at the eighth (his 17th) after missing a short putt. It all added up to another 65.

But perhaps the most ominous presence on the leaderboard was Henrik Stenson. The Swede won the FedExCup and Race to Dubai in 2013 and the only thing missing from his CV is a major. He struck the ball magnificently and, crucially, putted really well. All was going smoothly until he reached the 15th and dumped his approach into the water beside the green, but he played a brilliant recovery to get away with a bogey and drop back to 4-under.

It helps that Stenson is able to propel the ball more than 300 yards with a 3-wood. And he was delighted to finish with a 67.

McIlroy, meanwhile, responded to dropping three shots in two holes exactly as you would expect the world’s best to do: with birdies at the 12th, 13th, 14th and 15th. Four-under par. Nothing to it. At the 16th, a 507-yard par 4, McIlroy needed only a 9-iron for his second shot. These guys are good! His putt came within a whisker of giving him another birdie.

At the 17th, McIlroy split the fairway with a drive that measured 335 yards, but had to make do with a par. And so to the 18th, a par 5, where a routine birdie got him back in the house on 66, one off the lead.

Special mention must be made of Tom Watson. At the age of 64, he negotiated Valhalla in 72 shots — two better than Woods.

More than 70 players finished the day on par or better. The PGA of America should take a bow for setting up a course that rewarded good shots. Nobody wants to see the world’s best golfers struggling in the mid-70s in round one. You can count on the fact that, come Sunday, Valhalla will present more difficult challenges.