Round 2 Recap: Rory McIlroy Builds his Lead in the Rain 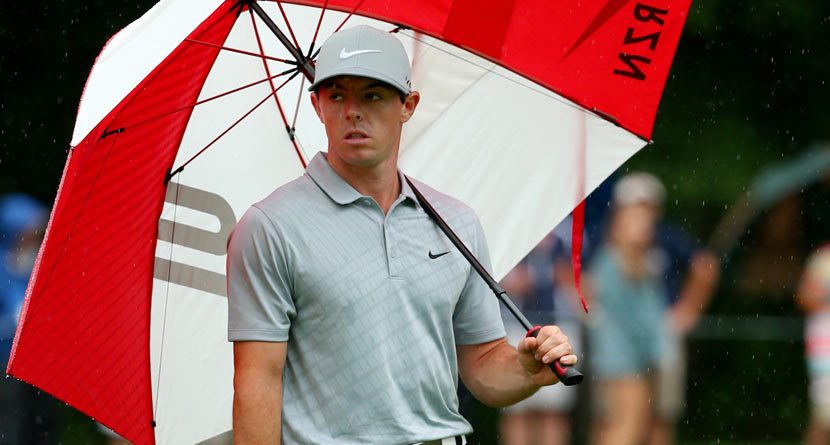 Rory McIlroy put himself in perfect position to win his second PGA Championship by adding a 67 to his sparkling opening round at Valhalla. After 36 holes he is on 133, 9-under par, and when he finished his day’s work, he was two clear of a stellar field. When the afternoon wave wrapped up, he held a one-shot lead over Jason Day and Jim Furyk.

With thunderstorms forecast and the weathermen warning that play was going to be disrupted, there was an early delay, but McIlroy shrugged it off.

Steady rain forced officials to suspend the round after just 20 minutes because of too much water on the putting surfaces and fairways. Work crews already were using squeegees on the greens when another burst of showers hit Valhalla. Play was halted as Ryan Palmer, one of the joint overnight leaders, was playing the first hole. And when it resumed, the field had to contend with mud on their golf balls after officials ruled that they had to play the ball as it lay.

It wasn’t so much the fact that McIlroy began his challenge with a 66 on Thursday that got everybody excited as the manner of it. He started slowly, missing a short birdie putt on the opening hole, failing to find the target at the second and third, but still reaching the turn in 3-under par. He then gave all three shots back at the 10th and 11th holes before reeling off four successive birdies.

It was all pretty effortless, and reminiscent of the kind of thing that Tiger Woods used to do in his sleep. So could McIlroy keep it going in the second round? He was one of the early starters, with the threat of torrential rain and thunderstorms hanging over the tournament. If he could shoot another good number and get his round completed, he would be in great shape ahead of the weekend.

Starting at the 10th hole, McIlroy dropped a shot at his third hole of the day, but he was soon heading in the right direction again with birdies at the 13th and 15th. At 6-under par, he was one behind Palmer. There are few players on tour with a better swing than Palmer and it is a surprise that he has only won three times. But he is having a good season, having lost the Honda Classic in a playoff.

Palmer played beautifully in the opening round to finish joint first with a flawless 65, and by the time he reached the turn in round two he had moved to 7-under par and led by one. Don’t expect him to get spooked by the rarefied air at this altitude.

One of the men taking the biggest strides forward on this 7,400-yard course was Steve Stricker. Earlier this week he was named as one of Tom Watson’s U.S. Ryder Cup vice-captains, and he was kicking himself on Thursday after dropping a shot at the 18th in a round of 70. He took his frustration out on the course when he returned. Starting at the 10th, the veteran birdied his opening hole, as well as the 14th, 15th and 17th to join McIlroy, Henrik Stenson, Lee Westwood and Kevin Chappell on 6-under par. A par at the 18th took Stricker to the turn in 32. Having written himself off as a playing member or Watson’s team, victory on Sunday for the popular Stricker would throw the cat among the pigeons.

But they all had to beat McIlroy, and when he eagled the 18th (his ninth hole) and progressed to 8-under par, he led by two after Palmer let a shot go at the 12th. Could he be on his way to another barnstorming victory? Few were betting against it. Without starting his second round, Tiger Woods was already 11 behind the world No. 1.

McIlroy dropped a shot at the second but birdies at the seventh and ninth saw him home in 34 for a 67. Palmer picked up a couple of late birdies to finish his 36 holes two behind McIlroy at 7-under par. Stricker, meanwhile, hit eight pars and a bogey on his second nine. He is 5-under par and still very much in the hunt.

They all tried to catch McIlroy and, one by one, they got within striking distance and then threw it all away, leaving the world No. 1 looking down on the field as he goes for his second successive major and his third victory in a row.

And should McIlroy march on to collect his fourth major at Valhalla, Tiger Woods will be back at home in Florida, nursing a sore back and asking himself why he bothered to turn for the PGA Championship.

The 14-time major champion defied all expectations by declaring himself fit to play, but then produced one of his worst performances in a major. On day one, he took 74 blows to complete his opening round and declared that if only he could get the ball round in red figures he would be right back in the mix. Instead, he bogeyed the fourth and clubbed a wretched tee shot at the sixth, followed by a missed putt from no more than two feet, costing him a double-bogey 6. With 12 holes still to play, he was 6-over par. The projected cut was 1-over.

Things went from bad to worse at the very next hole when another wretched drive left Woods clutching his back again and cost him another bogey. His race was run. He hobbled to the ninth, reaching the turn in a dismal 39. Ironically, as the discomfort increased and he eased off the power, Woods finally started hitting fairways and greens. But it was all too late.

Meanwhile, Phil Mickelson, who was playing with Woods, birdied the seventh, ninth and 10th to climb to 4-under. And when he holed an outrageous birdie putt at the 14th he was just four adrift of McIlroy.

With McIlroy following his opening-round of 66 with an equally impressive 67, the chase was on to catch him. Many tried. Nobody succeeded.

Would it be Lee Westwood? Would it be Jim Furyk? Maybe Jason Day? Or Rickie Fowler, the man who has performed so brilliantly in the majors this year?

Westwood’s 65 on Thursday was a welcome return to form, and he kept it going with a birdie at the third, followed by a string of pars to reach the turn at 7-under. Furyk, a man who is desperate to end a string of near misses, has been in fabulous form all year. Five-under starting the day, he joined the group on 7-under with birdies at the third and fourth.

Day, who specializes in challenging for majors but has yet to win one, joined the group at 7-under with an eagle-birdie combination at the seventh and eighth holes.

As for Fowler, he had a solitary par on the front nine along with three bogeys. But he also managed five birdies to move to 4-under. And that became six birdies when he rolled in a 12-footer for birdie at the 10th. And his seventh followed when he nearly holed his tee shot at the par-3 11th. Seven-under. He recorded only his second par of the day at the 12th.

With the rain having left the greens soft, it meant that everybody could attack the pins, and that’s exactly what they did. Furyk closed the gap on McIlroy to one with yet another birdie, this time at the seventh. It was breathless stuff, and it was difficult to keep up.

Westwood was next to hit the 8-under mark, holing a short birdie putt at the 10th. But a poor drive at the 13th turned out to be costly. Just 130 yards from the flag, he found a dreadful lie in the rough and dumped his approach in a hazard. It cost him a double-bogey and dropped him back to 6-under.

At precisely the same time, Furyk was dropping a shot at the 10th, his first bogey in 47 holes here and at the Open Championship.

Westwood missed the 15th fairway and hit another approach into a hazard, but a superb recovery limited the damage to a bogey. However, it meant he fell back to 5-under par, 1-over for the day. And another dropped shot followed at the next. Furyk was also letting one go. An hour or so earlier, it seemed certain that somebody would catch McIlroy, but everybody seemed to be suffering from stage fright. They came after Rory, but they couldn’t climb the mountain.

Day was next to record a bogey, so we were back to a two-shot lead for McIlroy over Ryan Palmer.

While all of this was going on, an Austrian (yes, an Austrian!) called Bern Wiesberger climbed the leaderboard. This guy is a proper golfer, make no mistake about it. He opened with a 68 and a flurry of birdies saw him get to 6-under par. He may not win this weekend, but this is a guy with plenty of game.

Much has been made of the strength of the Champions Tour. Kenny Perry proved the point by cruising through to the weekend with a 69 to add to his 72. And Vijay Singh is 3-under par.

But Colin Montgomerie, winner of the Senior PGA Championship and U.S. Senior Open Championship this season, looked likely to go even lower until he missed a tiddler at the 14th and then suffered a double-bogey at the 16th to fall back to 1-over par. He couldn’t afford to drop any more shots. And he didn’t. A birdie at the 18th saw him through to the weekend.