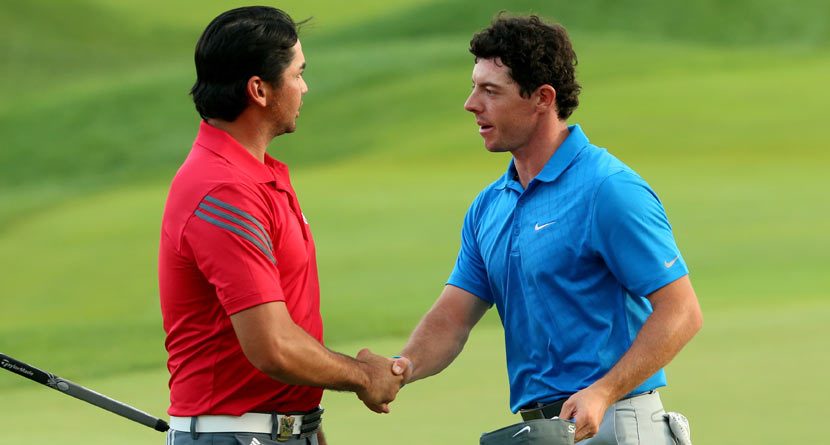 They poured into the PGA Championship at Valhalla by the thousands. Not since Tiger Woods was in his pomp has the the third round of a major been so widely anticipated.

It was good enough that Rory McIlroy was going for second successive major; it was better still that Jason Day should be the man going head-to-head with him. Day has yet to win a major but he has had seven top-10 finishes, a player unlikely to blink no matter what the world No. 1 threw at him.

And what an afternoon it turned out to be. One wondrous shot followed another as the roars were heard all around Valhalla. McIlroy and Day played their part, but they were not alone. Phil Mickelson, Rickie Fowler, Bernd Weisberger, Ryan Palmer, Jim Furyk, Louis Oosthuizen — they all had their moments. At the end of it all though, it was McIlroy who stayed in front.

Considering the pressure of the situation, it was a joy to behold McIlroy and Day sharing a joke together on the first tee. If ever two men were looking forward to their head-to-head battle, it was these two.

The smile disappeared from Day’s face pretty quickly, however, when he hit a horrific drive at the second hole that vanished into knee-high rough miles to the left of the fairway. He was lucky to find it, hacked it out, pitched to six feet and holed the putt for a par. Nothing to it.

Lee Westwood needed a fast start and got it when he drove the par-4 fourth and holed the putt for an eagle 2. It took him to 7-under par, two behind McIlroy, but he struggled to stay with the pace and wouldn’t improve on that number.

If McIlroy thought he was going to have it all his own way, he very quickly discovered otherwise. Furyk joined him on 9-under with a birdie at the fourth. Minutes later, Day drove the fourth green — a mere 372 yards away — while McIlroy hooked his tee shot into the trees. He couldn’t find the green with his second and left a 15-foot putt for par, which he duly drained. The Australian made his birdie and now there were three tied on 9-under, with Palmer and Fowler one adrift.

The breathless start continued when McIlroy rolled in a 10-foot birdie putt at the fifth, followed in from nine feet by Day. Ten-under. And that became 11-under when McIlroy made another at the seventh.

There were dropped shots too — McIlroy, the Open champion, had bogeys at the eighth and 12th. Birdies at the 10th, 15th and 16th took him to 12-under. And while McIlroy picked up a shot on par at the 16th, Day let one go to slip back to 9-under.

McIlroy still had company at the top, however, as Weisberger, playing with Mickelson, recorded a stunning 65 in which he very nearly holed two approaches. Mickelson, meanwhile, has burst back into life here. Despite missing several fairways, Lefty found a way to get the ball around in 67 and goes into Sunday on 10-under par.

Nobody has played better in the majors in 2014 than Fowler, and he is at it again this weekend. He birdied the third, seventh, 10th and 18th, where he missed an eagle by a whisker. There were no dropped shots and his 67 saw him move to 11-under par.

Furyk’s challenge came and went. At one point he was tied for the lead, but late dropped shots were very costly and at 7-under he has no chance.

McIlroy hit yet another drive in excess of 300 yards at the 18th but put his approach into a greenside bunker and knew he had to make a birdie to end the day one in front. He left himself with an eight-footer and of course he holed it. His 67 took him to 13-under par. And Day was still hanging onto his coattails when he also birdied the final hole to move to 10-under.

Long before the leaders went out it was already clear that we were in for another day of sensational scoring — a total of 74 players made the cut, and lots of them were heading the right way. None more so than the young American prospect Brooks Koepka.

He started the day on level par, nine behind McIlroy but five birdies on the front nine saw him reach the turn in 32. He also dropped two strokes. Koepka is one of the new generation of players whose approach is to attack every flag and the greens were extremely receptive. Four more birdies followed on the back nine, but a dropped shot at the last meant he had to settle for a 66. At 5-under, he joined Marc Warren of Scotland as the early clubhouse leaders.

Oosthuizen, the 2010 Open champion, recorded his second successive 67. At 9-under, he is a danger.

Justin Rose had a 67, Branden Grace a 68, and out on the course, putts were being rolled in all over Valhalla’s greens.

Sergio Garcia, who finished runner-up at both the Open Championship and the WGC-Bridgestone Invitational, struggled during the opening two rounds at Valhalla but made the cut and then remembered he has a new laid-back approach to life, one that sees him treat disaster and glory just the same.

The key for the Spaniard is that he has finally found a way to get the ball into the hole. Week after week, month after month, year after year, he has driven the ball brilliantly and struck irons shot to birdie range — and time and again, he has missed those putts. But his claw-grip method is working and the short putts that were once his nemesis no longer seem to bother him.

Related Link: Rickie Fowler and Sergio Garcia on the Bag

Like Koepka and Warren, Garcia began the day on level par. Birdies at the first and fourth saw him to the turn in 33, and he birdied the 10th, 11th and 14th to move to 5-under. Another birdie or two might have him believing that he could still win this thing. But he, too, had to settle for a 66.

Hunter Mahan has endured an indifferent season, but turned it around with a 65 to move to 7-under. A good final round may well be enough to convince Tom Watson that Mahan deserves a pick for the U.S. Ryder Cup team.

Then there’s Weisberger, whose best finish at a major is T-67 — the only time he’s ever made a cut at a major.

“I played well and am very proud of the way I have got myself into contention,” Weisberger said. “I know I can compete at this level and my game is really sharp. To finish with three birdies was great, and the one at the 18th was my first birdie on the par 5s this week.”

What a day, and what a final round to come. Incredibly, we saw almost 300 birdies in the third round. There will be many more to come before this tournament concludes.

So here we have it – McIlroy starts the final round 13-under par, one ahead of Weisberger, Fowler 11-under, Mickelson and Day 10-under, and Oosthuizen, Palmer, Henrik Stenson, Mikko Ilonen and Palmer all on 9-under.