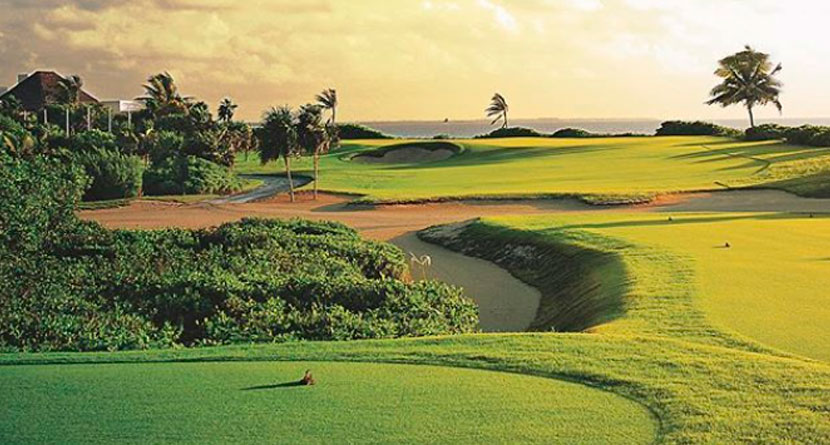 Greg Norman is known for a great many things over his long career on the PGA, PGA of Australia, and European Tours, with over 65 wins across those three. Since his playing days have ended, Norman has launched several successful business ventures including the prestigious Greg Norman Golf Course Design.

GNGCD has created over 100 courses across the world and lays claim to several top 100 courses on six of the seven continents. With Shark Week wrapping this weekend it is the perfect time to take a look at some of the best courses that “The Shark” has created.

Located less than 20 miles from the historic Pyramids of Giza, one of Egypt’s best golf courses. The private parkland-style course features an 18 hole, par 72 layout that uses the natural landscape of the region to craft a design that fits perfectly within the community it was created for.

Created as the Doonbeg Golf Club in the mid-’90s the Trump International Doonbeg is one of the best courses in Ireland. Completed in 2002, Norman celebrated the occasion by competing against, and defeating, Irishman Padraig Harrington in an exhibition match.

The first Norman-designed course in South America is the El Desafio course in Argentina. One of the key elements of a Norman design is his ability to use the local area to craft a unique experience for a given region. When speaking about the course Norman said “We were able to incorporate the topography into the golf course, which has some of the most scenic landscapes in the world. The natural beauty of Patagonia has always intrigued me… When you see it, you realize what Patagonia is all about: the jagged mountains and the vast, infinite views … This is really a spectacular place.”

As we have seen, weaving through beautiful natural scenery is Norman’s forte, so a course that can incorporate the Mayan jungle, mangrove wetlands and the Mexican Caribbean Seas is just par for the course. Since 2007, the course has been home to the Mayakoba Golf Classic which was the first PGA Tour event to take place outside of the U.S.A. and Canada.

Another beachside Norman course is The Bluffs, crafted along a stretch of white sand beach in South Vietnam. The course is one of the top 100 courses in the world and boasts a difficulty due to its prevailing winds that can come at you in all directions depending on when in the year you play. The course also uses the natural layout of the area which includes large dunes that separate the player from the neighboring waterway.

While it is thought of as one of the best courses in the world, there is very little chance you will ever get to play this extra exclusive Norman-design. Created as the private club for Australian media mogul Kerry Packer, the course for many years was kept off of most “Best Of” lists because the voting members for various publications were not able to step foot on the grounds to play a round.

Prior to his death, however, Packer opened up the course a bit to let voters in to play, if just so he could prove that he had one of the best courses around.

Created in 2008, Cornerstone quickly became one of the best Norman designs winning “Best New Private Course in Colorado” and came in second for “Best New Course in the U.S.” by Golfweek Magazine in its first year. With picturesque views of the Colorado Mountains in the background, Cornerstone sits as another prime example of Norman’s ability to incorporate the surrounding area to craft a course that is a feast for the eyes, as well as a challenge for the golfer.

Home to the Valero Texas Open, The Oaks Course at TPC San Antonio was a combined effort for Norman, with Sergio Garcia testing his design chops alongside. The course has been praised by combining traditional course design while creating a fan-friendly layout that improves on the experience for those attending the VTO since it moved to TPC San Antonio in 2010.

Nestled within the affluent and prestigious Jumeirah Golf Estates, The Earth Course is a stunningly designed course for Norman. Again featuring expertly crafted holes through a beautiful vista the tour has been the host of the DP World Tour Championship, the final stop on the European tour’s “Race to Dubai” since 2009

Originally an Alister Mackenzie design, the course at the NSW golf club is the highest-ranked course that Greg Norman has put his signature spin on, currently ranked as the 18th best course in the world. It makes sense that a club in Norman’s home country would be his best, and after completing initial updates to add tees and improve greens to modern standards, Norman has remained the consulting course architect to make sure that vision for the club comes to fruition.