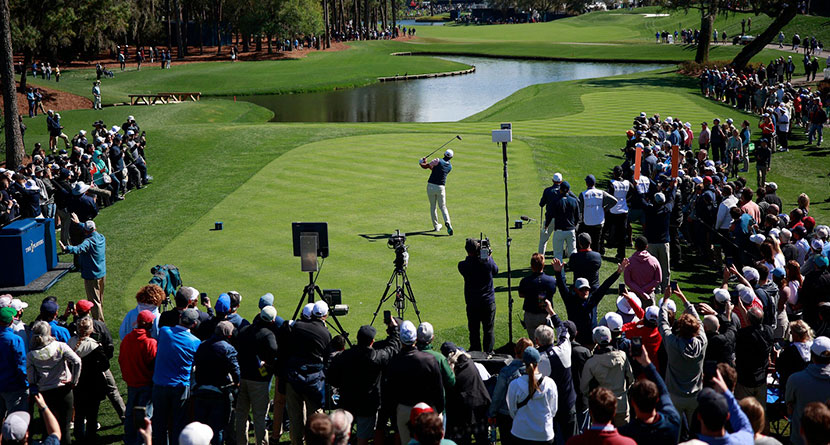 A wet and wild weekend at TPC Sawgrass is primed for a Monday evening finish after it took 55 hours to complete the first round and the 36-hole cut didn’t take place until Sunday afternoon.

The Golf Channel / NBC broadcast reported that 3.8 inches of rain had fallen on the course from Wednesday to Saturday, allowing for only a few hours of play over Thursday and Friday, which created a definitive advantage to half the field based on their tee times.

Most of those who teed off early on Thursday were able to get their first round completed on Day 1 of the event with only a few needing to finish on Friday morning. The late-early wave, however, had most of their rounds to play on Friday, but only four hours of play took place as more dangerous weather moved into the Ponte Vedra Beach area.

Updated summary of weather and delays/suspensions for the first round of THE PLAYERS Championship (Thursday-Friday) pic.twitter.com/14Aj23eWGo

That late-early wave faced the brunt of the brutal conditions when play resumed on Saturday afternoon. Most players had to finish their first round and begin their second in conditions that featured dropping temperatures and winds blowing upwards of 30 MPH.

With a draw gap that large, some big names found themselves on the wrong side of the cutline, including Collin Morikawa, Patrick Cantlay, Brooks Koepka, Xander Schauffele and Jordan Spieth.

What’s the plan for Monday?

The third round, which began later on Sunday afternoon, restarted Monday morning at 8 a.m. ET with India’s Anirban Lahiri sleeping on the lead at 9-under par.

A host of Tour pros looking for their signature victory are lined up behind him, headlined by the likes of Paul Casey, Sam Burns and Harold Varner III.

Golf Channel and ESPN+ are handling wall-to-wall broadcast duties on Monday with third-round coverage expected to wrap up around 10:30 a.m.