2022’s Major Champions And The Significant Shots They Hit 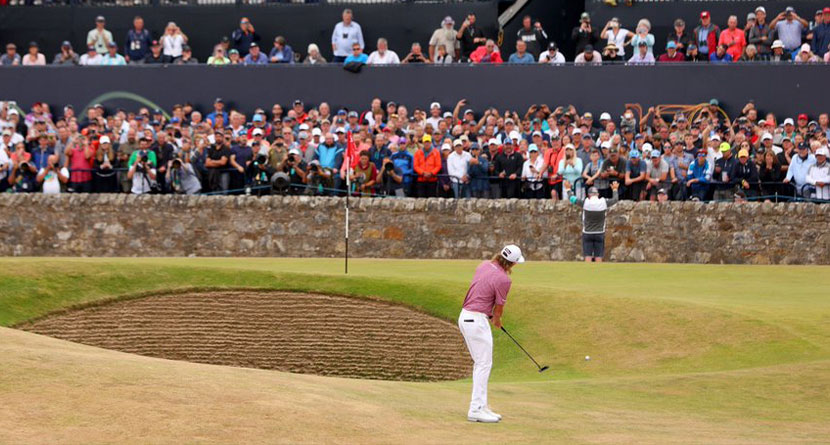 NASSAU, Bahamas (AP) — All it takes is one shot to settle the nerves, to create momentum or restore confidence, or in the case of Justin Thomas, to stop the bleeding.

Thomas has won the PGA Championship twice, and both times he looked back to a moment before the final round that was crucial to winning.

In a series of interviews, they shared the signature shot of the major they won, along with a shot that was pleasing because of the subtle quality or the circumstances.

Scottie Scheffler was so nervous about his three-shot lead going into Sunday at Augusta National that he was in tears that morning. Two holes into the final round, the lead was down to one and Scheffler was in trouble again on the third hole.

The memorable shot of what became a runaway victory was chipping in from short of the third green for birdie. Smith made bogey for a two-shot swing, the lead was back to three and no one got closer the rest of the way.

“The timing of it was great,” Scheffler said with a laugh. “I was trying to get it up there to have a putt. At worse, I’d have a good look at par. And it happened to go in.”

But it was another wedge a few holes earlier that really stood out. The one place to avoid with the traditional Sunday pin on No. 1 is long. Scheffler was in the trees and hit a good punch shot that rolled just over the back.

“It’s one of the hardest pitches on the course,” he said. “You have this shelf. You’re down below the green. Everything runs away from you. The odds of keeping it on that top shelf? I don’t know if you can tell on TV but it goes up, down, left to right. It’s such a hard shot. I hit it so well it looked like it wasn’t hard.

“That was the chip that got me settled in that all right, I can do this.”

Thomas was in a three-hole playoff at Southern Hills with Will Zalatoris, both opening with birdie on the par-5 13th. Next was the reachable par-4 17th, with a creek to the right that meanders in front of the green.

“I hit it in the left bunker in regulation, so I knew that had to be my miss,” he said. “I aimed at the left bunker, cut it to the second one, and if the wind wants to take that up the gap, great. As soon as it came off, it was a perfect shot.”

It found the green for a two-putt birdie and one-shot lead, and he won with a par on 18.

Yeah, this shot was worth the club twirl. pic.twitter.com/S524NtY86u

The meaningful shot cleaned up a mess from the day before.

Thomas was sliding from contention with each of the five bogeys he made through 15 holes, one of them on the par-5 13th. The 16th hole looked like another when he drove into the rough, had to chip out and hit a pedestrian wedge to 25 feet.

“The one thing I’ve been really struggling with this year is fairway bunker play,” Matt Fitzpatrick said after winning at Brookline.

That’s what led to his first major. He had a one-shot lead when he drove into the bunker left of the 18th fairway. With the steep lip, it looked like his safest option was short of the green. He hit a “squeezy fade” from 156 yards with a 9-iron to 18 feet for par.

“It was just kind of natural ability took over and just played the shot that was at hand, if I was a junior trying to hit it close,” Fitzpatrick shot.

Three holes earlier, he hit a 5-iron out of the rough on the 15th that led to birdie. But it was another birdie, even more unlikely, that stands out to him.

“The putt on 13,” he said. “It was 50 feet. For whatever reason, I genuinely felt good over the putt. I felt like I had a chance, and you don’t often get that. I’ve had it multiple times over 10-footers and 20-footers. That one … I felt good over it.”

As for the timing? He had missed a 6-foot par putt on No. 10. He three-putted from 15 feet on the par-3 11th, falling two shots behind. And then he dropped the big one.

“It just changed the momentum for me,” he said.

Imagine leading the 150th Open at St. Andrews by one shot on the 17th hole, 40 yards away with the notorious Road Hole bunker between you and the pin.

“It was pretty daunting,” Cameron Smith said. “I hit a great putt. I figured somewhere on the putting surface I’d have a good look at par.”

The danger was losing pace if it started too close to the edge and funneling into the pot bunker. The pace was perfect and settled 10 feet away. Smith made everything on Sunday, and that par putt was no exception.

“I was trying to hit it to a certain spot on the green and trying not to think of the big bunker that was staring me right in the face,” he said. “That’s probably the one shot on the back nine where if it goes pear-shaped, we’re not talking.”

He made five straight birdies in that closing 64. But when asked for a meaningful shot, he thought back to the second round, a 3-wood into the par-5 14th for an eagle.

“My favorite shot of the week,” he said. “I had to take a little off a 3-wood and hold it off the breeze, and it turned out perfect.”

It told him the long game was in top form. The short game never seems to leave him.