5 Best Moments From The Match: Champions For Charity 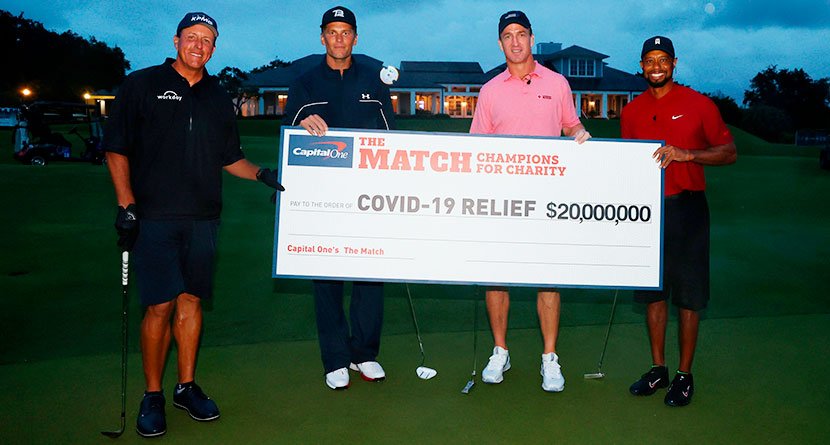 Memorial Day Weekend in the United States is the unofficial start to summer. And while a Sunday afternoon is usually a great time to broadcast something unique for a great cause, the middle of a long holiday weekend may have forced some who otherwise would have tuned in to The Match: Champions for Charity to be otherwise distracted.

By most accounts, the third iteration of Tiger Woods and Phil Mickelson’s Match series was the best of the bunch, not only because of the stakes — charitable contributions to COVID-19 relief — and the addition of Tom Brady and Peyton Manning, but the entire synergy of the event and the learning curve that the producers of the event have been operating on.

In the spirit of catching you up on what you may have missed, here are some of the best moments from the five-hour broadcast:

Bringing in Manning and Brady was a stroke of genius. Not only did the world-class quarterbacks look eminently relatable to regular golfers, they added some color to the proceedings, starting from the beginning of the broadcast when Manning was asked who he would have liked to caddie for him if given the choice.

Phil Breaking Down How To Play A Chip Shot

Phil’s gonna have us here until Thursday with lessons like this, which I’m fine with. pic.twitter.com/2WFjjSvFdp

We all know Phil Mickelson is a great talker, but listening to him break down the shot he’s trying to hit, why he’s going to do it that way, and then nearly holing it by doing exactly what he said was one of the best parts of the entire day.

Brady Shuts Up Barkley With Hole Out

With Brady struggling at the start of the round, Charles Barkley was able to talk some trash and even felt confident enough to challenge Brady to a match with Barkley giving the shots. Brady, being the incredible athlete that he is, summoned something super special.

No need to watch it when you hit it as well as @TigerWoods did off the tee on Sunday. pic.twitter.com/x6KVj6Lzur

Maybe the most overlooked portion of The Match was just how in control and well Tiger Woods played. He added some tidbits of commentary here and there, but by and large, Woods let his clubs do the talking. After three months off, Tiger looks ready for the hectic run of big-time golf that will be coming in the next six months.

"Chuck I'd love to see your fatass try to dunk a basketball right now" ?pic.twitter.com/ZXp0ewsnoo

Another one of the highlights of this Match iteration was in the inclusion of Justin Thomas as an on-course reporter.

Aside from the actual golf insight he provided, pulling aside both the pros and the ams to talk about the shots they were about to hit, JT may have fired off the line of the event at Charles Barkley when Chuck downplayed the quality of a short-game shot saying it’s like getting excited over seeing a pro basketball player dunk.

While those five moments may stick out, here’s a more comprehensive highlight reel to get you through your Tuesday-after-a-holiday.