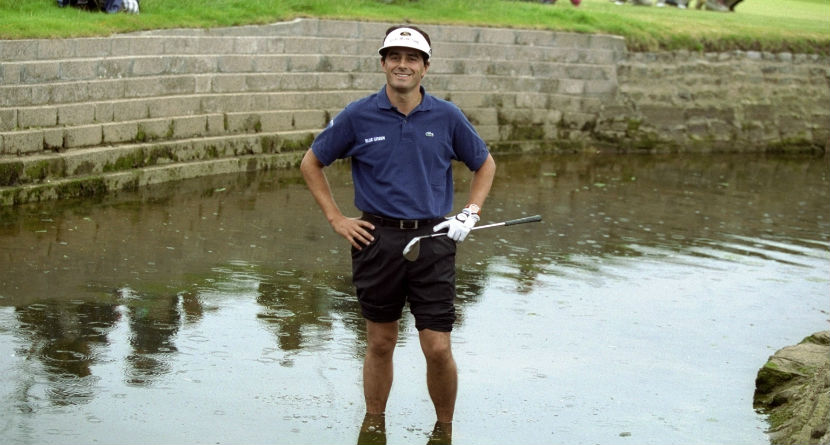 The Open Championship has been producing some of golf’s most dramatic finishes for more than 145 years and along with those, it’s also produced some epic meltdowns.

Here are eight performances that players at The Open this weekend do not want to repeat come Sunday.

Jean Van de Velde’s collapse at the 1999 Open at Carnoustie was not only one of the most epic meltdowns in Open Championship history, but quite possibly in golf history. Coming to the 18th leading by three, all the Frenchman had to do was make double-bogey and he still would’ve won the tournament.

Instead, Van de Velde took driver and hit his ball onto a peninsula over on the 17th hole, stopping just short of falling into the Barry Burn river. With 185 yards left and five shots to make it in, Van de Velde did the unthinkable, fanning a 2-iron right. The shot clanked off a stadium railing, off the rock wall guarding Barry Burn and into some of the thickest rough on the course.

From there, Van de Velde chunked his third into Barry Burn. Following the shot, he famously took his shoes and socks off, rolled up his pant legs and debated hitting the next shot out of the river.

Commentator and two-time U.S. Open champion Curtis Strange said during the telecast, “You hate to be harsh on somebody, but this is one of the most stupid things I’ve ever seen in my life. I have to be honest.”

Adam Scott had a four-stroke lead with four holes to play at the 2012 Open Championship at Royal Lytham & St. Annes and gave it all back in one hour. He made bogey on 15, then lipped out a par put on 16. Meanwhile, Ernie Els birdied 18 to shoot 4-under on the back nine to post the clubhouse lead.

Scott then missed the green on 17 which led to his third bogey in a row and was now tied with Els heading to 18. His drive found a pot bunker and he was forced to lay up. From there he failed to get it up and down handing Els his second Open Championship. However, Scott did go onto redeem himself and win the 2013 Masters.

Hale Irwin won three U.S. Open titles in his career, however he came this close to an Open Championship in 1983. While it wasn’t on the 72nd hole, Irwin whiffed this two-inch putt on the 14th hole at Royal Birkdale on Saturday. He ended up finishing one stroke behind eventual winner Tom Watson.

2018 European Ryder Cup captain Thomas Bjorn was leading the 2003 Open Championship at Royal St. George’s by three with four to play. After a bogey on 15, the Dane compounded the error when he found a bunker on the 16th. He then left two in the trap. Finally, he got it out but by then it was too late. Ben Curtis became the unlikely champion.

We go back to this painful miss during the 1970 Open Championship at St. Andrews. Doug Sanders had this bunny for the win but pushed it with a nervous looking stroke. He ended up losing to Jack Nicklaus in a playoff. Unfortunately for Sanders, he never won a major in his career and was this close to it.

During the 1978 Open Championship at St. Andrews, Tommy Nakajima was rolling during the third round at 4-under through 16 to tie for the lead, but disaster struck at the famous Road Hole. His approach found the right side of the narrow green, but the pin was cut on the other side. His putt hit a ridge and ended up in the bunker. From there it took him four to get out en route to a quintuple bogey. Needless to say, he didn’t win on Sunday. Jack did.

During the 2001 Open Championship at Royal Lytham and St. Annes, Ian Woosnam had just moved into a tie for the lead, but on the second hole was assessed a two-stroke penalty for having 15 clubs in his bag, one more than the 14-club max. He ended up finishing tied for third.

The 1972 Open played at Muirfield featured a showdown of two legends of the game. Lee Trevino and Tony Jacklin were tied on the 16th hole during the final round when Jacklin had a decent look at birdie while Trevino was struggling to save par. Trevino then chipped his in and Jackin pushed his putt 3-feet past the hole. Moments later, he missed the shortie giving Trevino the outright lead and his second consecutive Open title.