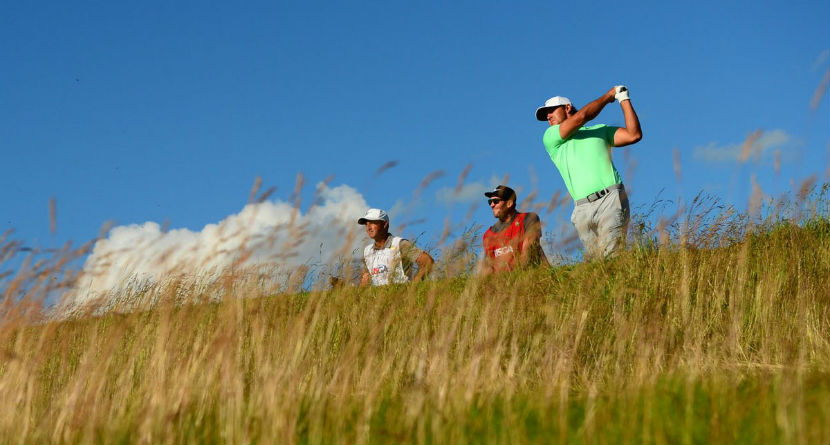 Over the course of the last month and a half, both of golf’s governing bodies, the R&A and the USGA, held their major championships. Coincidentally, both of them had scoring records broken culminating on Saturday of the Open Championship when Branden Grace shot the first ever 62 in a major. Prior to that at the U.S. Open in June, Brooks Koepka pounded 7,800 yard Erin Hills into submission splitting fairways and taking names on his way to tying the all-time four-day scoring total of -16.

Today’s technology also allows the best players in the world to have no more than 7-irons into most par-4s, with the longest hitters sometimes having flip wedges into 450+ yard holes. With soft conditions, wide fairways, and the wind down, the courses have no way of protecting themselves against low scores. For example, Koepka hit a 379-yard 3-wood on the 72nd hole at the U.S. Open because driver was too much!  As a reminder, these are supposed to be the toughest tests in golf.

It begs the question we may actually have to start considering – are 9,000-yard courses the answer?  Golf.com’s Alan Shipnuck offered up his solution which would force players to hit more mid to long iron approaches, just like the good old days.

I have been saying for years that to seriously challenge Tour players—to make them hit long-irons into some par 3s and 4s, and have a few 5s be true three-shot holes—a course needs to be around 9,000 yards. Maybe 10,000. I tweeted this in the wake of Grace’s 62 and it ruffled the feathers of many folks, including various Tour players. “That is complete nonsense!” Billy Horschel replied, with typical understatement. Colt Knost offered a similarly nuanced take: “U seriously have no idea what ur talking about!”

I’m not saying a 9,000-yard course is a good idea, only that it has become a necessity. It’s true that a course of that length would require an obscene amount of land and water and time to play. But the USGA and R&A have shown no stomach for rolling back the pros’ gear.

The entire equipment industry is built on FOMO (fear of missing out); we all want to play the latest and greatest stuff that the pros use. A reduced-flight ball would be a disaster for fan interest: Who wants to watch Dustin Johnson drive it 270 when we can do it ourselves? So while throttling back the ball and driver would be an easy fix to make today’s courses relevant again, I am operating under the premise that it will never happen, despite the pleas of Jack Nicklaus and many other truth-tellers. So where does the game go from here?

Course setup seems like an easy answer. [The U.S. Open and Open Championship] would have been a totally different test if it had played tournament and fast. To bank on dry, fiery conditions to give a venue its teeth is foolish.

So what about deep rough and narrow fairways? No doubt that setup is a deterrent to low scoring. But it also leads to a tedious, constrained style of golf, where shotmaking is diminished. A very penal setup off the tee means power players will simply leave the big stick in the bag. Driving it long and straight is the toughest task in golf, and those who can do both deserve to be rewarded; if there is no room to hit driver, the sport has been diminished and the venue is not offering a true test.

The USGA and R&A have begat a mess that can’t easily be cleaned up. Golf’s most important events now need the perfect mix of sunbaked greens and stiff wind to offer the right challenge.

Every sport evolves, and golf has done so rapidly this century, which began with the solid-core ball revolution. Like it or not, the time has come.