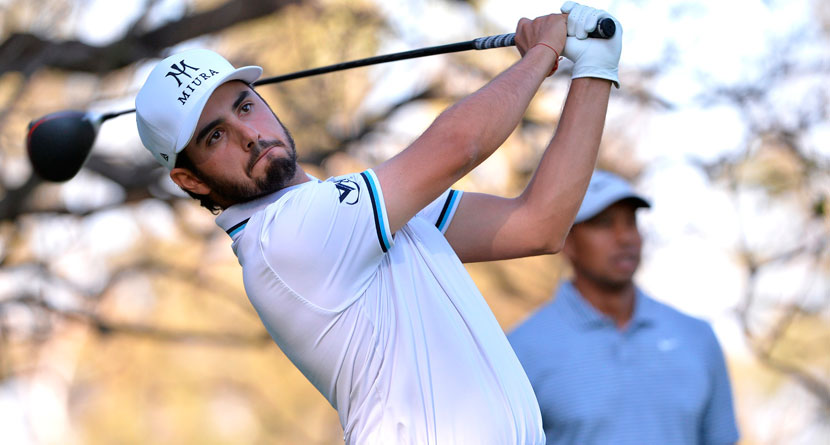 Be careful what you wish for, Abraham Ancer.

The 28-year-old PGA Tour pro will be making his Presidents Cup debut next month at Royal Melbourne for International captain Ernie Els, and it will be up to Els to decide if the best Mexican player in the world will be teeing it up against Tiger Woods in Sunday singles.

Ancer, playing this week at the Mayakoba Golf Classic, was asked about his goals and expectations for his first International team appearance and he didn’t keep anything close to the vest when it came to revealing who he’d like to play against.

“I would like to play against Tiger (Woods),” Ancer said. “But the truth is that our objective is to do everything we can to win. Winning a match in the singles would be very special, so we need to try to get the cup.”

Abraham Ancer is set to make his @PresidentsCup ? debut next month, and he’s hoping for a duel with ?

“I would like to play against Tiger (Woods).” https://t.co/V6ovVaoYWK pic.twitter.com/pGYhJoURlc

Ancer won’t know if he’ll get his wish until Saturday evening, but the optics of calling out Woods for a match had folks on social media scouring the internet archives for a similar Tiger call-out from Stephen Ames at the 2006 WGC-Accenture Match Play Championship.

Here’s a little recap to jog your memory:

While Ancer’s call-out wasn’t made in the same tone as Ames’ 13 years ago, you need to be careful what kind of ammunition you give a player of Woods’ caliber. Coming off of win No. 82 at the Zozo Championship and currently ranked No. 7 in the world, Woods isn’t someone anybody wants to see teeing it up against them at the moment.

The Presidents Cup will take place from December 12-15.