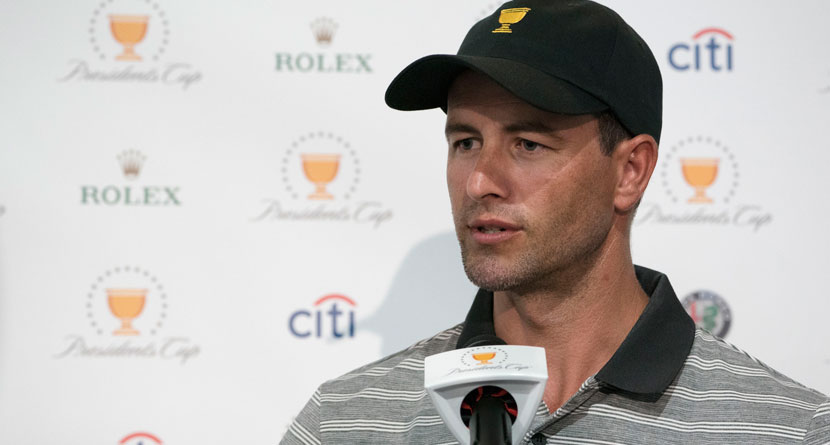 Adam Scott will be playing in front of his home-country fans for the third time next week in the Presidents Cup at Royal Melbourne. And while rabid Aussie golf fans will get a rare look at some of the game’s biggest names, their home-country hero had a pointed request for his fellow countrymen over the weekend: don’t cheer for Tiger Woods or anyone else on the American team.

Speaking to The Herald-Sun, Scott empathized with fellow Aussies who don’t get to see the likes of Woods, Dustin Johnson, Justin Thomas or other American superstars in person, but he wants to keep some semblance of a home-course advantage as the International Team looks to capture just their second victory in the 12-event history of the competition.

Woods, who will be making his first return trip for a competitive event since the 2011 Presidents Cup, enjoyed a warm welcome from the fans that Scott felt was a little too friendly considering what was on the line.


“Last time it was too friendly,” Scott said. “Quite bluntly, we want the home-crowd advantage, and I’ll be disappointed if they are cheering enthusiastically for Tiger or anyone on the U.S. team.

“I’m not saying be a poor sport, but one challenge our team has always had is gaining a home-soil advantage because it’s rare that stars like Tiger and DJ come to Australia or Korea where we play these things and the locals are excited to see them as much as anyone on our team. But while we appreciate them very much, we don’t have to cheer for them.”

‘I’ll be disappointed if they are cheering enthusiastically for Tiger or anyone on the U.S. team.’ https://t.co/OcMRCtxQWo pic.twitter.com/SNlNB9vXsz

It’s a tough position for Australian fans, as Scott pointed out. While they’ll most definitely be backing the International Team, the ability for these fans to get to see some of the best players in the game up close and personal is simply one that they don’t get very often.

Aside from some of the nationality challenges that have plagued the Internationals in past events, their forfeiture of home-course advantage due to golf fans who are more interested in the individuals than the team they represent will always be an obstacle to overcome.

We’re less than two weeks away ?

Catch a preview of the matches Down Under with Road to the @PresidentsCup now on @nbc and streaming: https://t.co/Gp5A0wjmVE pic.twitter.com/eC00HVkDW2

Scott will be looked to by International captain Ernie Els to be a veteran leader on a squad that features just five members of the 12-man team to have competed in the event previously.